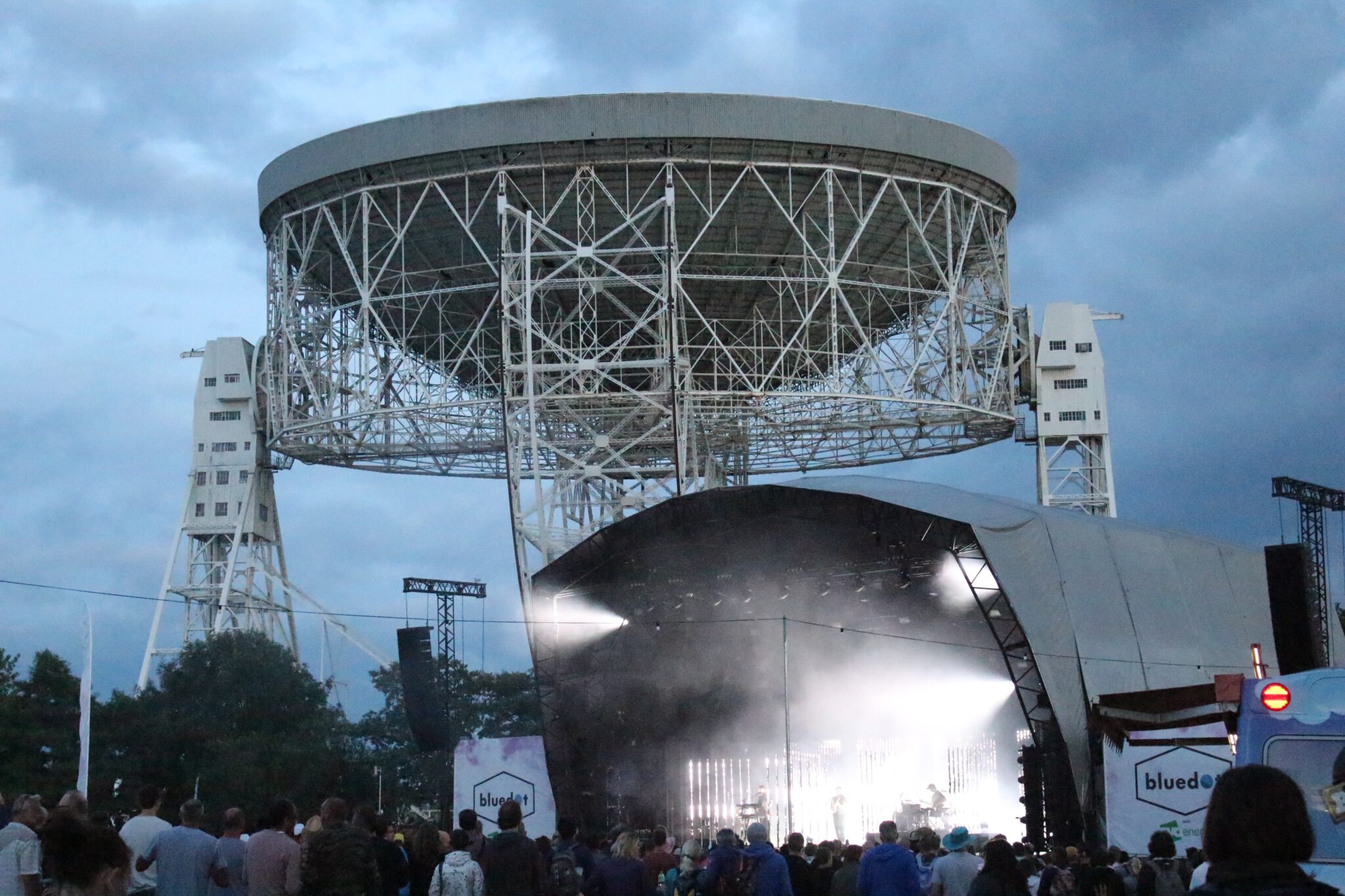 The 50th anniversary of the Moon landing is this year’s theme for Bluedot festival, the 4-day music and science event set in the gentle green fields surrounding Cheshire’s iconic Jodrell Bank Observatory.

You may buy tickets for Bluedot having been seduced by the appealing music lineup but take it from me, once you’re there, it’ll be a hard task to pull yourself away from the science and space side of the festival: you’ll discover talks, demos, exhibitions and workshops, all presented by enthusiastic experts. And it all takes place under the majestic sight of the Lovell telescope.

When Bluedot first arrived on the scene in 2016, Tim O’Brien, Associate Director of Jodrell Bank Centre, said he wanted to “blow people’s minds with amazing music and incredible ideas”. You’ll have the chance to hear Tim speak – he opens the festival and gives a talk each day on the main stage.

The first wave of artists has been revealed with New Order and Hot Chip  joining suitably spacey Kraftwerk and Jon Hopkins as Bluedot’s top acts this year. Hot Chip headline on Friday with new material, and New Order will celebrate a homecoming festival performance on the Sunday night.

Bluedot opens on Thursday for the second year running with a performance by Manchester’s own symphony orchestra, the Hallé. They will introduce Lift Off, a performance of specially selected sci-fi themes and music related to the Moon, accompanied by unique big screen visuals. Last year the orchestra presented The Blue Planet, and with its dramatic footage of endangered ocean creatures, it was a fitting accompaniment to a festival devoted to being 100 per cent sustainable.

Kate Tempest, 808 State, John Grant, Gruff Rhys,  Jennifer Lee aka TOKIMONSTA and Anna Calvi are also on the lineup.  Plus Les Amazones d’Afrique, the first all-female West African supergroup featuring Mariam Doumbia of Amadou and Mariam and Angelique Kidjo. The Lucid Dream with their dense psychedelia are a must-see, and there’s a DJ set from award-winning actor and activist Maxine Peake.

Forget any ideas about a token childrens’ play area with a bit of facepainting. Bluedot has several fun, hands-on science and space related areas packed with stuff for kids (and adults). You can get stuck into simple scientific experiments and take advantage of the chance to chat with enthusiastic astronomers, scientists and leaders of environmental projects. You can also visit the Space Pavilion, a permanent exhibition on the site, and then take your offspring to watch a space-themed theatre production. There’s more than enough to keep you busy for the entire festival.

One of my favourite locations at Bluedot is the peaceful 35-acre Arboretum: Jodrell Bank’s permanent garden area where you can wander, sit in the sun (hopefully) and find tranquil respite from the buzz of the festival site; you’ll also discover installations here and there. This (below) was the brilliant Between Stillness and Storm in 2017. There’s also a bar and a small stage for chilled folk and world music, and yoga sessions by the pagoda.

There is a strong sense of place at Bluedot, with many Mancunian and Cheshire based artists involved – both on the science and the music side. Tony Walsh read his moving tribute to Manchester: This Must be the Place; reclusive production outfit WH Lung gave one of their first (stunning) performances here. This year sees New Order appearing, plus famed dance outfit 808 State.