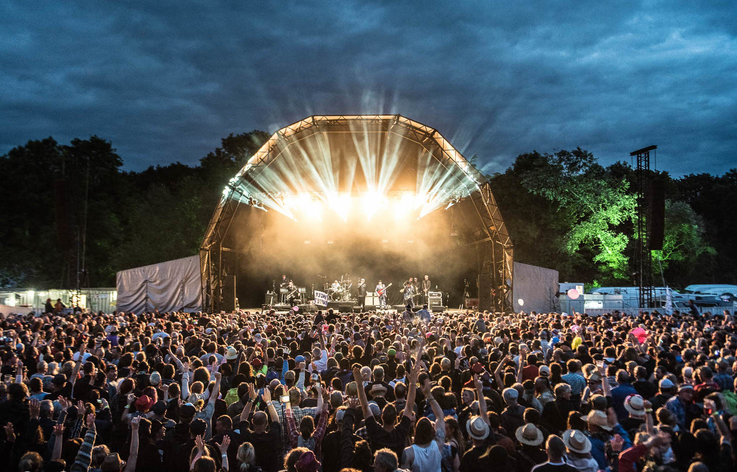 There’s always a few surprises on the Bearded Theory lineup and for 2019, the team have managed to sweet-talk Doves into playing a festival set – they’ll be no doubt wowing the crowds on the Pallet Stage on Sunday. Doves are back for 2019 after a fair few years on ‘hiatus’, during which time they’ve all composed and recorded (Jimi Goodwin produced solo album Odludek in 2014). So far they’ve only three performances on the calendar, so this appearance at Bearded Theory is quite a feat.

Also returning to the main ‘Pallett’ stage is Seth Lakeman, who last put in a Bearded Theory appearance back in 2013. He’s on the atmospheric Woodland Stage – Bearded Theory’s beautiful carved oak stage set in, well yes you guessed it, the woods – it’s an atmospheric and peaceful setting and perfect for watching some of the more folk and country artists.

Other returnees are The Mahones, a rousing, or rowdy, up-tempo Canadian-Irish band who will be making plenty of loud music on the main stage again.

As a wholly independent venture, started by three friends 12 years ago, Bearded Theory has always done things its own way, green-lighting artists and stages who would not usually share the same space. Take for instance the Magical Sounds tent. Loved by many but passed over with a puzzled glance by one or two, the trance-heavy psychedelic global dance tent attracts some of the top artists of the genre – and its decorations are in a class of their own. I’m already giving this year’s Magical Sounds a big thumbs up with Transglobal Underground leading Friday; Sunday is looking particularly tasty with Banco de Gaia and The Orb closing out the tent. Make sure you catch a rare set by Dr Trippy with his swampy, India-influenced trancey electronica.

Among all the fun and chaos of Bearded Theory, the festival is a staunchly family-friendly event and there’s a school on site for Friday (places sell out fast so don’t delay if you’re thinking of enrolling your kids), and that’s in addition to the usual children’s area with an assortment of creative and fun activities.

Sunday is Fancy Dress day (the theme for the year is announced a few months beforehand) and there’s also the famous Beard Competition: fairs fair though, it’s open to everyone, whether hirsute of face or not, and hipsters certainly don’t get a look-in. Beards are a creative construct, so far I’ve seen ones made from Lego, flipflops, soft toys…

The nitty-gritty – how much does all this musical goodness and frivolity cost? Bearded Theory is still one of the cheaper festivals on the circuit at £122.50. That’s for four days with nine stages. It’s usually a sell-out. I’d advise you to get the plastic out now and start marking off the days on your new calendar. Oh, and start knitting that beard too.