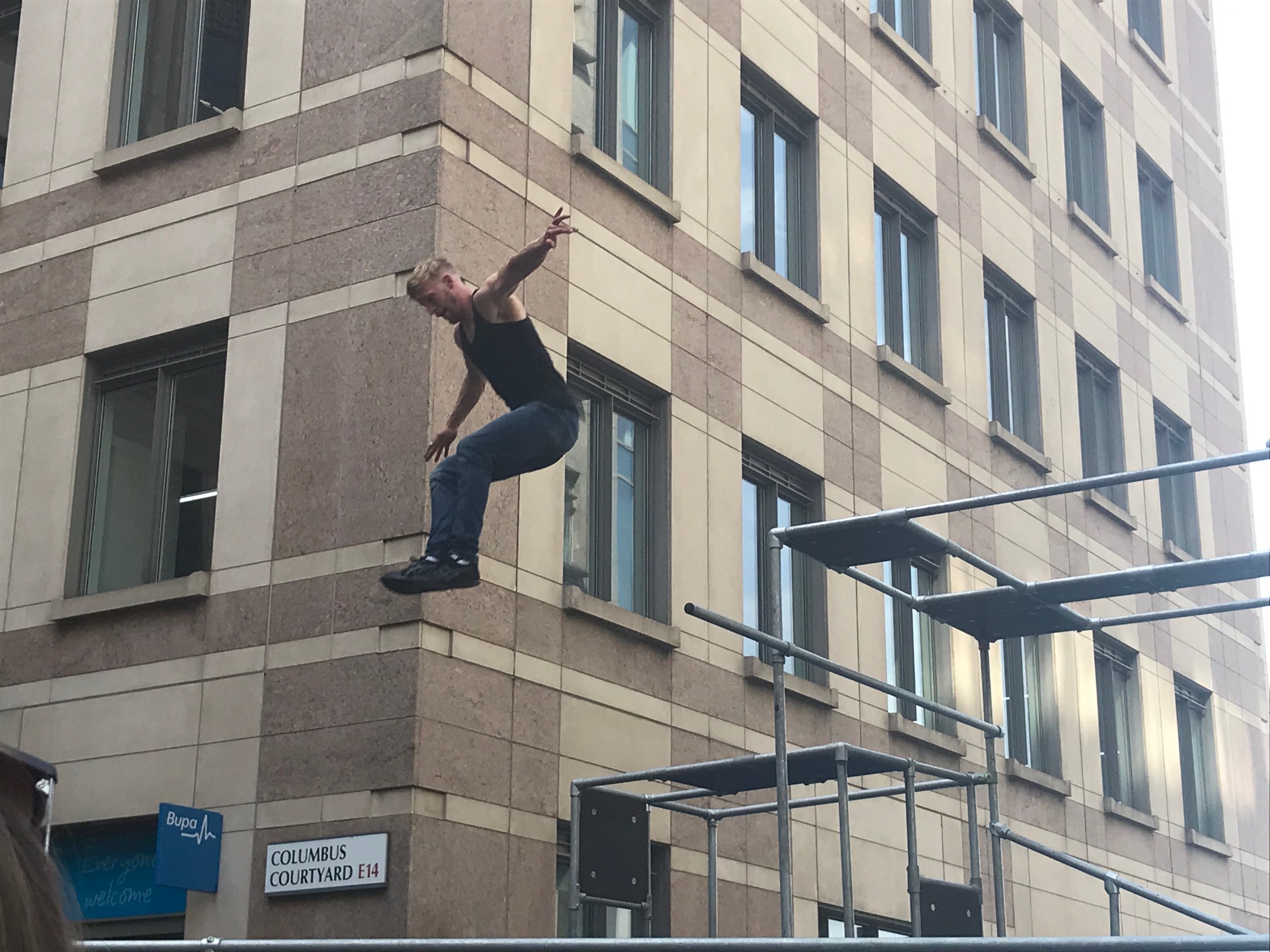 A collaborative parkour dance theatre production called ‘On Edge’ is currently playing at festivals and theatres around the country. The idea was the creation of visionary artistic director Anja Meinhardt, director of theatre company Justice in Motion. On Edge brings together members of the Parkour, slackline, dance and theatre community. The aim of the production is to highlight the often hidden global issue of modern slavery, which is currently affecting millions of vulnerable people.

On Edge is a physically demanding and exhilarating performance with a lyrical beauty combined with some heart-stopping parkour moves. The story takes place on a building site; the set is constructed mainly from scaffolding which is endlessly reconfigured throughout the performance.

The narrative charts the progress of a migrant worker who sets out on his new life full of hope, dreaming of being able to lift himself out of poverty and support his family back home. As he takes his place with the other workers, the story unfolds as he – and the audience – slowly realise that all is not as it seems, and the dawning realisation that he has been lured into a life of slavery takes hold. It’s a powerful and original piece of theatre and is an emotional experience to watch. 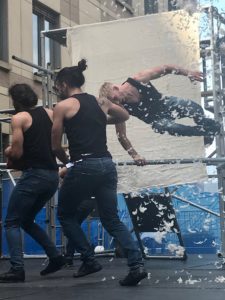 The accompanying soundtrack was composed by Quentin Lachapele for On Edge. It’s a jagged and dense electronic soundscape, encompassing the metallic sounds of the building site. Lachapele has been with the team for the entire process, devising and adapting the choreography as the work developed.

The six members of Justice in Motion come from different backgrounds, ranging from parkour, such as George Mayfield, who plays the gangmaster, to theatre, slackline and circus. Phil Hulford who plays the migrant worker comes from a dance background.

I spoke to George Mayfield about On Edge…
What interested you in getting involved in this project?
“It’s an honour to be able to contribute my parkour skills to a project tackling such an important human rights issue as modern slavery and, having never done theatre, I knew it’d be a huge learning experience!”
What has been the reception to the show so far?
“The reception in Brighton, Edinburgh and London has been excellent – we’re thrilled with the impact it’s having on people. One of our aims is to get the parkour community engaged, so far we’ve had lots of parkour people come to the show and feedback has been really positive!”

On Edge is part of a larger project, the Freedom Tour. It is in partnership with INSPIRE Parkour Community. 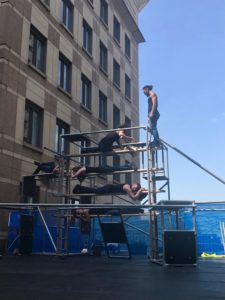 Shows and workshops are Free Entry. At Bedford, the show takes place on Saturday at 3.30pm and on Sunday at 11.30am and 3.30pm. Between the shows, the team will be building obstacles and anyone who wants to have a go can practice some parkour moves: the On Edge team will be on hand to supervise and help. There will also be workshops at Banbury, times yet to come.

There are plans to take On Edge on tour again next summer, to Edinburgh Fringe and worldwide.

Currently there are a reported 45 million people in some form of modern slavery worldwide. There is huge potential for that figure to rise, as cities in rapid development demand even further need for cheap labour. Human trafficking exists on construction sites and farms but also goes on in our daily lives, in nail bars and car washes. There has been a severe denial of workers rights in the building of football stadiums with many workers injured or dying. As the artistic director Anja Meinhardt said to me “By the time the World Cup starts, there will be one death for every player.”

Photos taken at the Greenwich and Docklands International Festival by gourmetgigs.com, except for image 2.