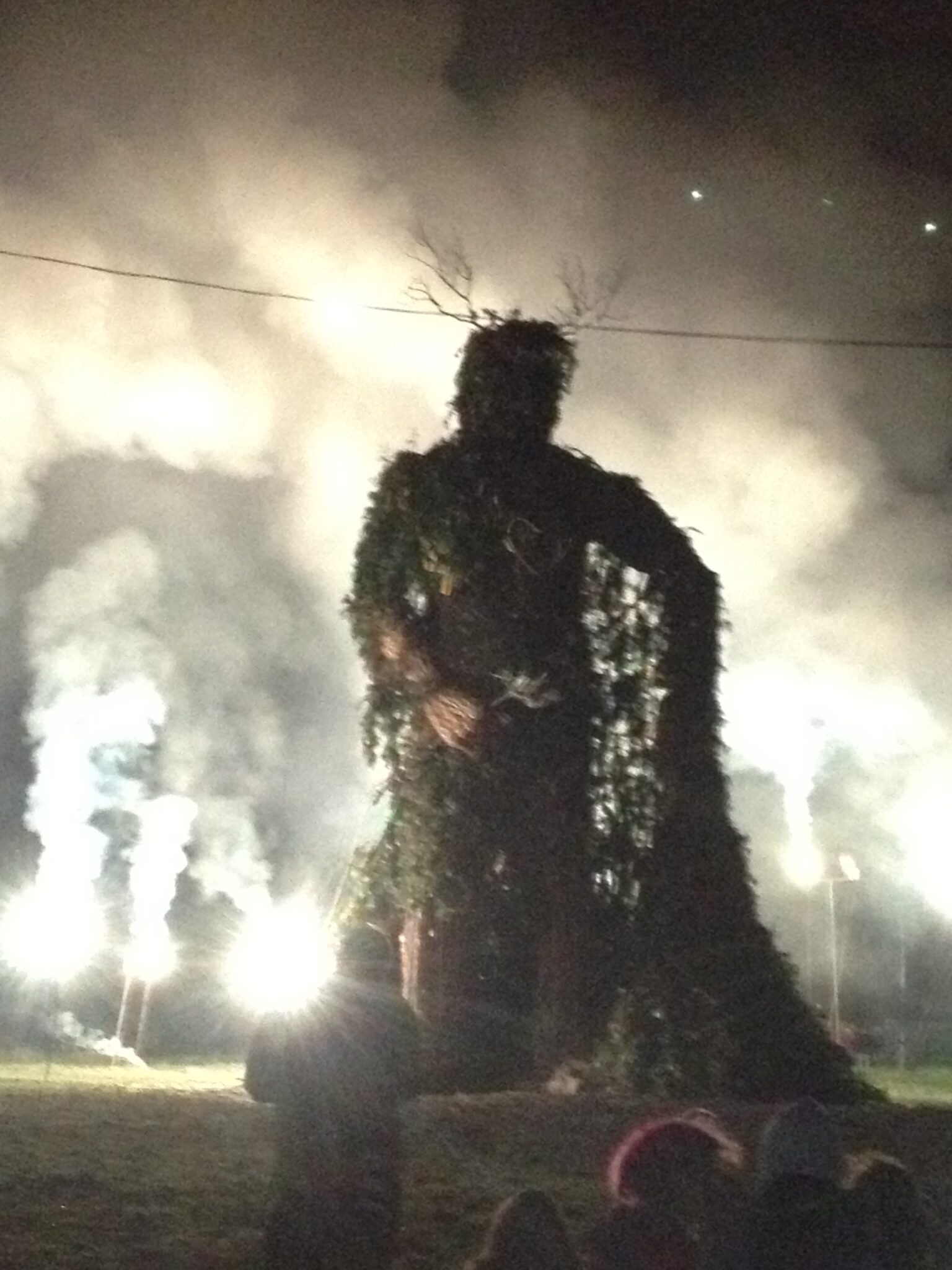 Into this post-Olympic, rain-drenched mid summer, the tenth Green Man festival burst into life. Nestled in the Black Mountains of mid Wales, Green Man’s arena on Friday is a wonder to behold; still at this point a green and pleasant land with its beautifully positioned main Mountain Stage – a natural amphitheatre, with a convenient steep slope so those at the back can laze on the grass and still have a perfect view of the action on stage. I head up to the Thali Cafe for the first of many addictive chai teas and some shelter from the rain, and take in a set from Irish band Cashier No 9, whose sound is a heady liquid jolt of feel-good summer heaven, a swirl of jangly guitars and heady harmonies. To Make You Feel Better is a song which does exactly that.

Over at the Far Out Tent I just managed to catch the lush sounds of Stealing Sheep. The Liverpudlian girl trio, Becky, Emily and Lucy, have beautiful voices and an indie-folk feel with their hypnotic harmonies set against a heavy, tribal drum beat and a rich psychedelic depth. Their single Shut Eye is a definite ear worm – in a good way.

Next up on the same stage are a band I was sorry to have missed at Field Day – Toy. They have some great songs, but the sound in the Far Out Tent is too loud and distorted. As the set progresses, Toy’s hipster cool image and absence of engagement with the audience feels increasingly less appropriate for the folky, ramshackle feel of Green Man. Errors are a Scottish post-electro band formed in 2004. Theirs is a thoroughly enjoyable set, with some of the more jagged numbers slightly reminiscent of Metronomy.

Time to take a wander up to the more intimate Walled Garden where London-based Vadoinmessico, featuring members from Italy, Australia, Mexico and England, enthusiastically pump out an infectious mix of mostly Latin and African rhythm to an enthusiastic crowd.

The Mountain Stage in the gathering dusk is the setting for country and blues style American bar room sounds from The Felice Brothers: Ian Felice, guitarist and main vocalist and the imposing figure of James Felice on accordion and vocals plus three other band members. There is a real honesty about this raw, ramshackle band of ex-buskers that is endearing and they are on top form, after seeing a very underwhelming and uncoordinated concert of theirs back in March. They play their foot-stomping popular numbers like Frankie’s Gun and Whiskey in my Whiskey – to which no one has problems remembering the words.

By 11.30pm, plentiful cider consumption gets the better of me so long-awaited Mogwai remain on the ‘to see’ list. They did sound beautiful, though, from my tent, as I drifted off.

Wake up on Saturday to the sound of rain pitter pattering onto the tent. We surface at lunchtime, and the arena is now a sea of mud, but who cares, there’s a day of music, cider and dancing ahead.

At the Far Out Tent, singer songwriter Beth Jeans Houghton bounds on stage with her band, hair peroxide blonde and bouffant Siouxsie Soux-style and dressed in teeny hotpants. The Hooves are garbed in various glam-rock guises. Fans push past us in desperation to get to the front… followed closely by anxious looking parents – Houghton’s fan base is clearly hardly out of primary school, but then I notice more than a few of the 60-plus age dotted around too. Houghton’s vocal range is far reaching: she can hit high notes for operatic effect, and then take it down low for tracks like Man’s Life. Her songs contain a mix of elements from new folk to pop, and she clearly wins everyone over. Highlights are Dodecahedron and Atlas.

A beautifully executed set with emotion and precision from Michael Kiwanuka is followed by Van Morrison. The signs are that he is in a great mood as he treats us to a crowd-pleaser set, among them Brown Eyed Girl, Baby Please Don’t Go, Jackie Wilson Said, Higher Ground, the gorgeous ballad Ballerina (with an upped-tempo section near the end which worked well) and for the finale, Gloria. No Plan B from the new album is included. His musicians are flawless. While the drummer gives a final flourish, Van is whisked away in a helicopter, and everyone seems more than happy to have witnessed this superb set. 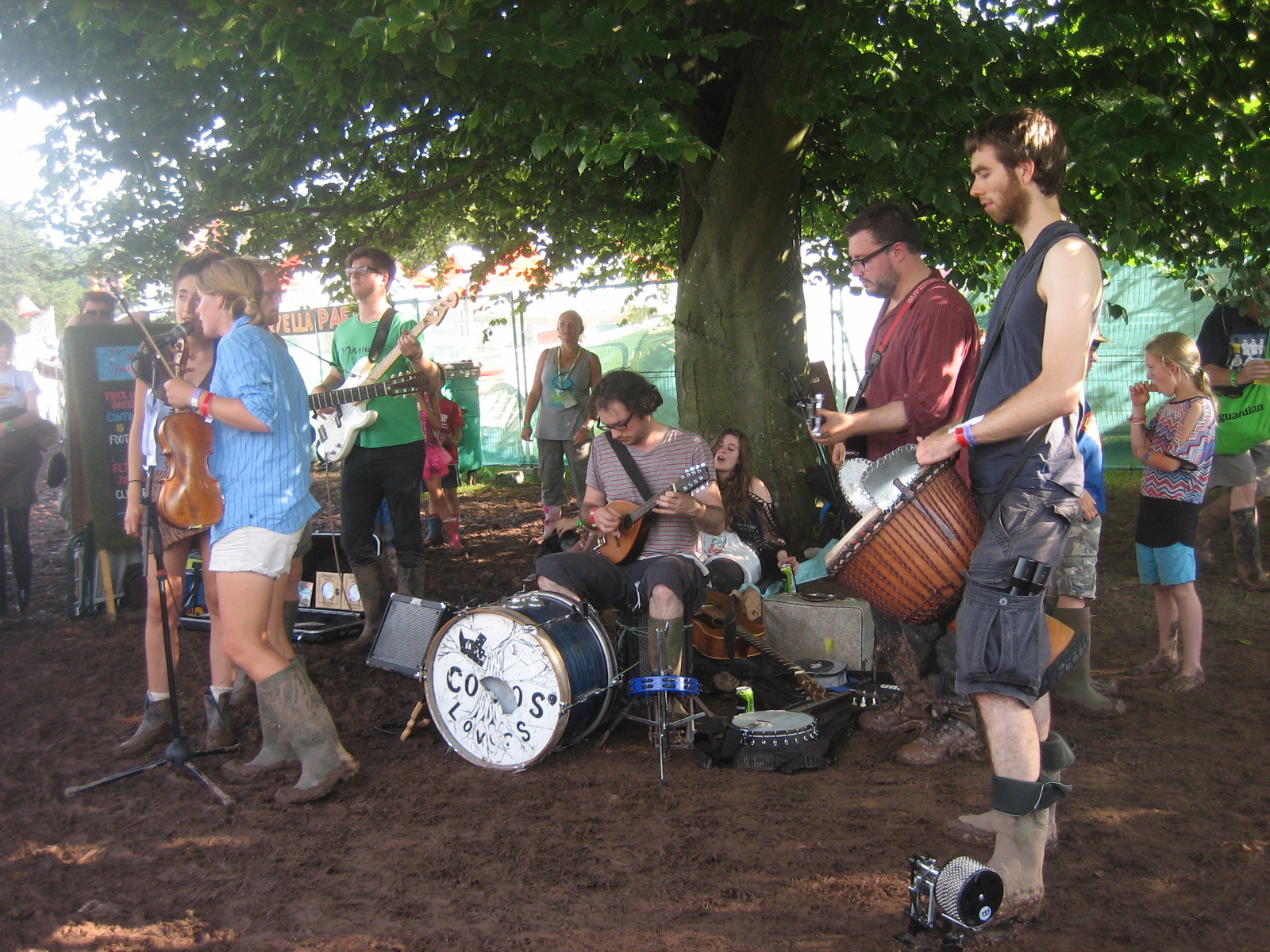 Metronomy were added late to the line-up: I was surprised as I wasn’t sure their electro sound would fit in at Green Man, but it works. One or two tracks have a touch of prog-rock style  twiddling which lose the audience but tighter numbers like The Look sound great and get a really positive reaction. For those after a more intimate gig, country blues singer-songwriter Willy Mason delivers a powerful and emotional set at the Walled Garden stage, surrounded by an awed crowd quietly singing along, word-perfect, to all his songs.

We hang around for a late-night Vinyl Revival set, with Pete Paphides. Everyone dances squelchily in smelly mud to a storming set.

The crowds have thinned considerably because of the weather which, actually hasn’t been that bad.

I attend a workshop called ‘Make Your Own Potions’. Twenty of us, including quite a few blokes, make a little pot each of natural body and lip balm, under the expert tutorage of Tania of Dream Thyme Herbal Body in Totnes (01803 847702).

My festie-pal whiled away the time in the Chai Wallah tent watching folkie band Ahab, who he tells me are so good that we are now scheduled to see them at The Lexington in October. The rest of the afternoon is spent drifting about the festival site, looking in at Einstein’s Garden – a paradise for kids with lots of learning eco experiences.

Late afternoon the clouds completely clear. It’s beautiful hot sunshine. The Walkmen do a superb set of stylish indie numbers. Now the finale is here, a set from Feist. Although she’s in a suitably upbeat mood for the festival closer, her choice of material is somewhat on the introspective side. However, with her charm, and her strong, emotion-filled vocals which seem to soar out of the speakers, over the crowds and into the silhouetted Welsh hills, she manages to get away with it. Most of the numbers are from her latest album, Metals. Her moody number Anti-Pioneer is an absolute standout. At one point, she orchestrates a crowd singalong – we sing a note according to the colour of our tent.

The final moments of the festival arehere so we head to the Green Man and wait expectedly around the huge figure. After a half hour wait, at 12.30, the Green Man is set alight. The crowds cheer. The towering figure at first burns slowly, and then more dramatically, to a backdrop of fireworks which shoot into the sky. The tenth Green Man festival is over.

Demographic: a very wide mix of ages. Loads of kids of all ages, and plenty of older people.

The Rough Trade shop is worth checking often for appearances and signings, usually one every hour or so. If you find CDs you want, buy them early. By Sunday afternoon they were running out.

Facilities: There’s no such thing as a nice festival toilet, but the Portaloos at Green Man were relatively clean, and always had loo paper. There’s a shower block near the arena. There were also 4 eco showers in the Nature & Nurture area, suggested donation £2.

Several bars dotted around the site, lots of beer choices, and no big queues. Food choice was very good. The Thali Cafe was a favourite: chai tea, good felafal and salads and delicious cakes, plus its majestic view of the Mountain Stage.