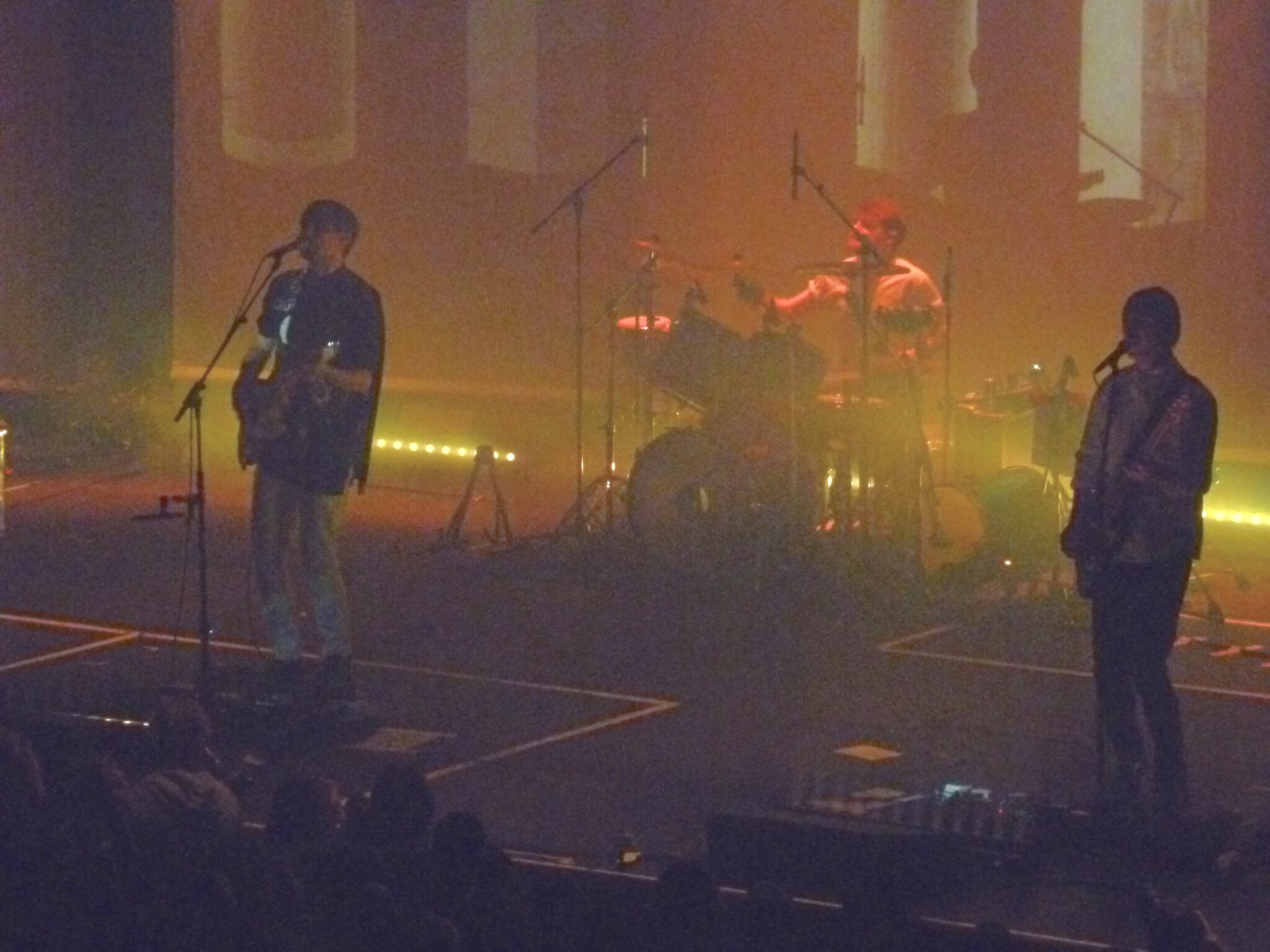 There are two Django Djangos. There’s what you hear on their albums, a fat slam of addictive, uptempo, feel-good melody, laced with distinctive harmonies with a sweet-sour balance. Then there’s live Django, which is an altogether more dance-driven, stripped, souped up version of the above, with a rocket up its arse.

Art house rockers Django Django are one of the bands I listen to when I’m feeling a bit down, they’re a form of therapy. If you can’t resolve your black mood, you can at least squeeze yourself in between the layers of Django’s summery waves and float away, or just forget your troubles and dance round the kitchen. Then again, I’ll listen to them when I’m feeling in a great mood as they reflect that good vibe back at me, nicely ramped up a few notches. Django are about conjuring images through a summer filter. Warming rays of hope glimpsed through a blind; a beach just around the corner. But it’s all about the narrative going on in your own head, rather than their story. They just supply the backdrop.

So to Django Django at the Roundhouse: to the portentous and spacey Introduction, out comes Vincent Neff and crew who bounce around the stage, whipping up the standing crowd downstairs into arm-waving dance mode; upstairs we’re jigging about a bit in our seats. Those luscious Beach Boys harmonies are unmistakable, but there’s no sitting back and pontificating on the textural layers here, the subtlety of their recorded work takes second place to this megablast of sound. This is Django party time and they’re a powerful and energy-filled presence, David Maclean’s driving and insistent drums and Tommy Grace’s atmospheric synths beckoning you out of your seat and out onto the dance floor. I managed to catch the band in 2012 at Field Day, and good as they were then, in a tent packed to claustrophobic proportions, this is proof they have made huge strides.

It’s a well rounded set with picks from latest album Born Under Saturn peppered among older numbers such as Life’s A Beach and Storm. Of the new material Pause Repeat sounds particularly powerful and new single, the 60s-influenced Shake and Tremble gets a big applause from the crowd. They play Reflections with its moody saxophone bridge. And here comes First Light with its soaring burst of a chorus “First Light, the fields are ablaze, cut through the maze… get in the picture”, which sends me into a teary rapture.

The set ends with a looser-sounding encore, and to be fair, they’ve covered a good sweep of their material. So we head out into the Camden night, mind and body buzzing, and I remind myself to keep a check for the the next Django Django tour.

** A very short support set from Stealing Sheep, with their new material including latest single Apparition from new album Not Real. A very different sounding band from the one I saw at Shepherd’s Bush a couple of years ago. Less folky, much more synth-driven, but still with a mysterious edge **

Did you go? Love to know what you thought…

WHO: Django Django, Stealing Sheep, Barney Artist
WHEN: December 9, 2015
WHERE: The Roundhouse