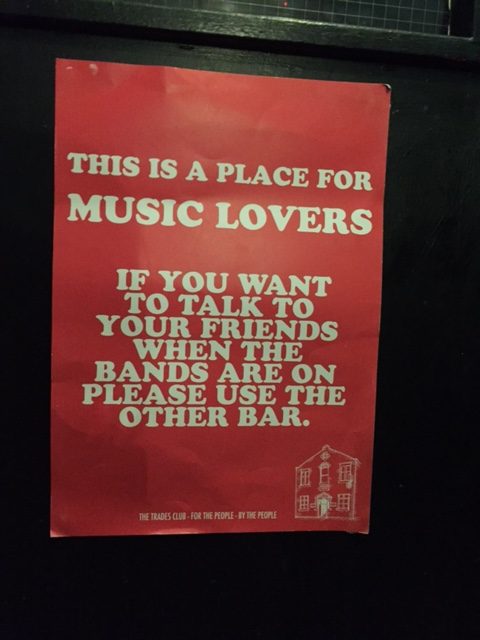 “This is a place for music lovers. If you want to talk to your friends when the bands are on, please use the other bar.”

The above sign is plastered prominently on the venue door at The Trades in Hebden Bridge, Yorkshire, my favourite small venue.

It’s a welcome sign; I’m one of those gig goers who gets (inwardly) grumpy if people are talking while the band are on. That’s not to say the audience have to be completely silent but I’ve had many a gig spoiled by incessant yawping. Sometimes the chatter doesn’t just take place between songs but rumbles on without pause; a low-level irritant that always manages to make its presence felt, no matter how loud the band. I’ve found myself wondering why people even bother to spend their hard-earned money on tickets when all they really wanted was a good old catch-up which could have taken place in the pub. It doesn’t seem to matter either if the band are playing at tinnitus-inducing levels – those talkers will just up their own volume in order to communicate their crucially important information – latest purchase from Primark, level of drunkenness the night before.

I have on occasion asked talkers to keep it down – if I think I’m not going to end up involved in a fight. If the talkers give you an icy glare and carry on regardless there’s nothing else you can do but slink off and find yourself another spot.

Avoid the back of the room

It’s where you’ll find most of the lurkers and drinkers. I recall one Richard Hawley gig where he alluded several times to the noisy talkers at the back of Shepherd’s Bush Empire while he was playing.

Do a seated crowd behave any better? Having sat upstairs for several seated gigs at Brixton Academy and other similar-sized venues, I would venture to say that yes, they do – perhaps it’s because this area tends to attract the older fans, plus being slumped in a chair puts you in a more placid frame of mind. But you can still get talkers and, if that happens, you may find yourself with no escape. Even the hushed grandeur of The Barbican, where Steve Mason with orchestra performed early 2017, wasn’t enough to subdue the couple seated behind me. What started as a bit of between-song banter became full-blown drunken blathering right through Mason’s numbers, until the bloke next to me turned round and politely asked them to be quiet. After this my neighbour was assailed by repeated grovelling apologies (almost as bad as the talking, but not quite) right up the end of the gig.

So maybe it’s time to spell out the rules, like the poster at The Trades. There are some events where silence is part of the experience; the one-day festival I’ve attended called SHHH – the quiet music festival is a case in point. Held in a church in London, Howard Monk and friends ran this cozy, delightful event, the whole point of which was that you sat silently when musicians were playing. 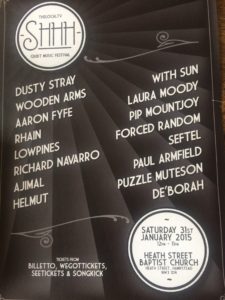 There is a theory that some younger gig-goers interact with live music in a different way. Rather than the artists be the focus of the evening, the focus is now the audience member themselves. The hapless musicians are reduced to mere ‘enablers’ of a good night out, a bit of background to enhance one’s evening entertainment.

This scenario played out recently when a friend went along to a favourite music-venue pub in London, one where audiences are as a rule most attentive – however this particular night a percentage of the crowd weren’t there primarily to see the band (even though they’d all coughed up £12 for the privilege). Instead they chatted away animatedly, showing each other highly amusing stuff on their mobiles to the accompaniment of whoops of laughter. At some point, an audience member who was there for the music implored the chatterers to be quiet, but to no avail. Eventually he exasperatedly asked them to ‘just fucking shut up’ – at which point security revved into action. But they reprimanded the bloke who’d made the sweary request for quiet, rather than the noisy after-work drinkers.

Re-establishing the rules for good-mannered gigging might be a good idea. There are ongoing problems with venues closing; live music needs to retain its stance as an attractive evening out for as many people as possible.

Your thoughts and suggestions are most welcome.