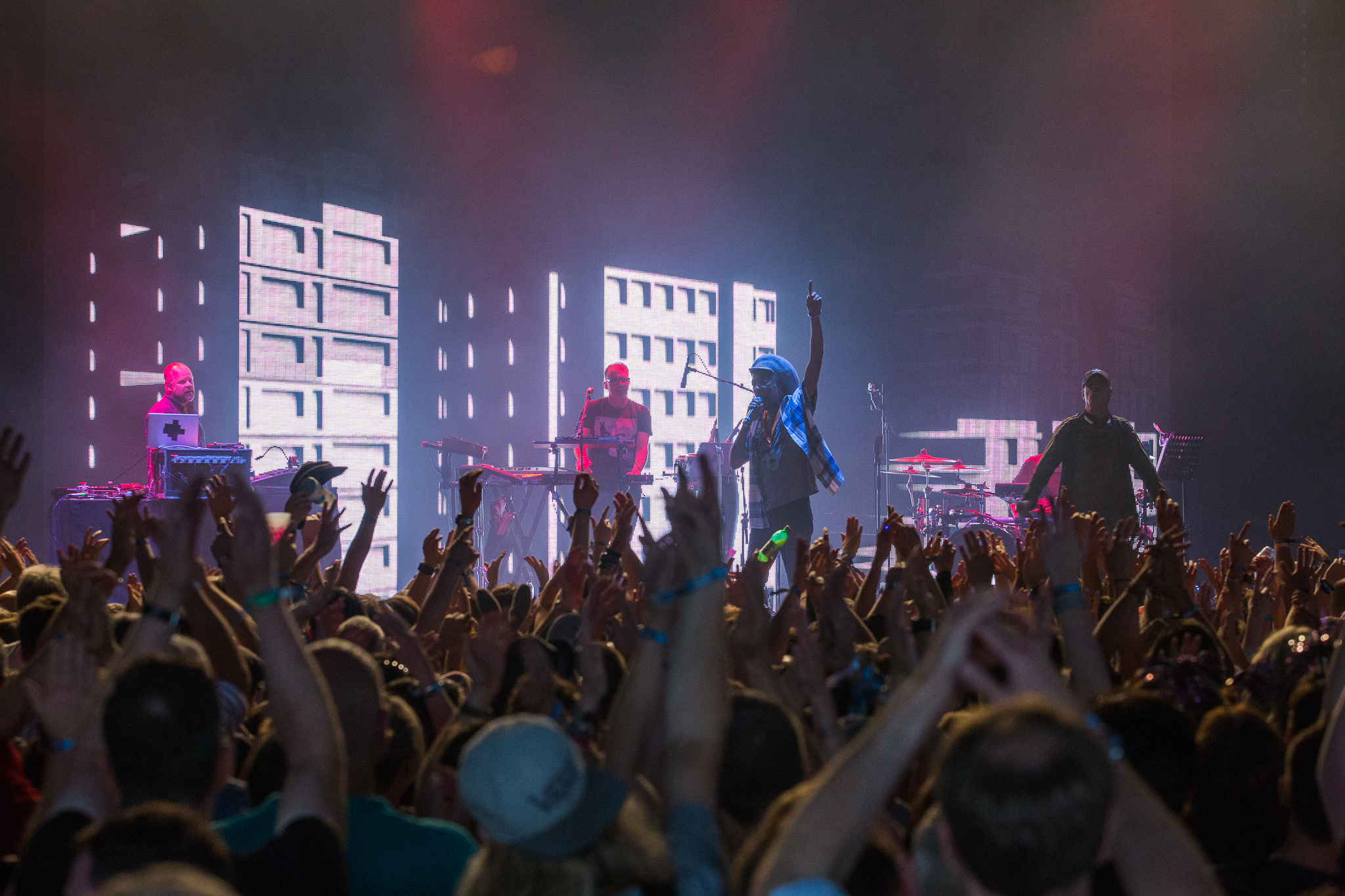 Review of Leftfield ‘Leftism’ at Bluedot festival, by Nicholas Mai

“Come on Tom, let’s go and see some proper music”.

And so the uncertain eight-year(ish) old boy dutifully follows his father into the tent where Leftfield are warming up the crowd nicely as the first of the big name opening Friday acts at this year’s Bluedot festival at Jodrell Bank, Cheshire. There’s a light smattering of corporate branding from Amazon under the canvas too – the online behemoth are the ones ‘Proudly Presenting’ this particular gig; the connection isn’t hugely explicit as to why the sponsorship of this late addition to the lineup, until you realise the commercial attraction of the content. Frighteningly – for this reviewer – their debut album ‘Leftism‘ is 22 years young this year and currently enjoying the usual Expanded Edition re-release we’ve come to expect elsewhere from rock acts in their twilight. For fans of dance music and also a good portion of this crowd it’s worthy of such re-evaluation and to hear in full once more as it’s being played here tonight.

In 1995 Leftfield’s Neil Barnes and Paul Daley seemingly rose with aplomb to the challenge and criticism from the sniffier end of the spectrum of the music press, who maintained that Dance was a genre that could and would only produce one-hit wonders. The ravers white-gauntlet was laid down with ‘Leftism’, a long-player that wilfully spanned and stretched the definition of dance music. It didn’t simply and obviously rely on Teutonic 4/4 beats as it encompassed trip-hop, ambient and dancehall reggae influences to provide a soundtrack not only to a clubbers night out but also the (dreaded) morning after back at your – or some random’s – home. The come up and come down if you will. The album crossed to the mainstream and paved the way for a whole generation of dance producers to become fully fledged album ‘artists’ – Faithless, Groove Armada, Roni Size, Basement Jaxx, The Chemical Brothers, Moby – all now household names with multi-platinum selling and critically acclaimed album releases. 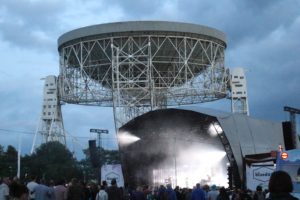 And so here we have misty-eyed ravers searching and yearning for another one of ‘those’ moments, alongside your average festival goer who recognises the odd tune from an advert back in the day, or who had the CD nestled between Oasis and Blur in their collection. Rather than just twiddling knobs, Leftfield – now sans Daley who only in recent years left to pursue solo projects – are aided and abetted in a live setting by (90s gasp!) proper musicians and a roster of guest vocalists, set against a backdrop of now synonymous projections and lasers.

So we get a set that encompasses the pounding house of Black Flute; breakbeat of Original and Song 3000 alongside a dub-influenced Inspection (Check One); and, well, Afro beats on Afro Left; through to the mellow bleeps and acid squelches of Melt. If proof were further needed that Dance has fully matured to be Rock music’s smilier brother and give a real sense of comparing conventions, we also get an encore. The band’s breakthrough and bona-fide hit Open Up. It’s positively thunderous and there’s a will-he/won’t he anticipation before the snarling vocal of John Lydon kicks in (unfortunately he didn’t, it was the only pre-recorded vocal element of the gig). The track hits the mark as the tent bounces again in unison; yet like many other tunes here tonight there’s more to be found beneath the aural surface, with lyrics that still have bite and prescience. This relevance and sense of an album and band that were and still are the sound of the future is carried right through to the closing of 21st Century Poem, a spoken-word ambient piece that topically and poignantly asks “how many dreams terrorised, til we rise… how many homes set alight, til we fight”.

Meanwhile, Tom is leaving the tent having finally descended from his dad’s shoulders, wide of eyes and grin that suggest it was the perfect way to end a hard week at school. Proper music indeed.

“Leftism’ is as fresh as the day it first hit the streets. I still listen to it regularly. Leftfield, for me, are the gold standard against which I measure all other club/dance acts. All three of their albums are just brilliant and they aren’t scared to give em’ a go live. I caught them at the Dance Arena at the Exit Festival in Serbia a couple of years ago. All the other acts, like Hardwell, came across like rank amateurs in comparison. Just luv em …….”