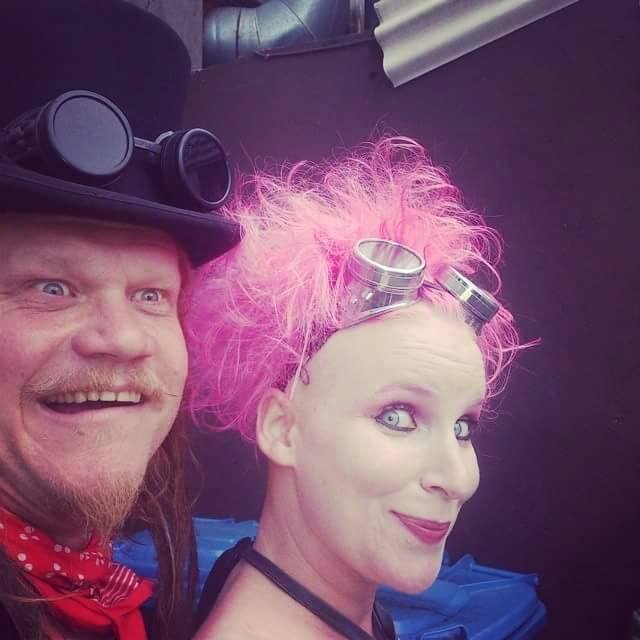 Put together Steampunk bands, cabaret artistes, Electroswing and Goth DJs, plus a mystery guest. Add tea-duelling competitions and the outrageous compere known as Dis Charge, coax your guests to dress up in suitably retro style and you have the ingredients for a party on a slightly dark and decadent side. For extra impact, set the event in the faded glamour of Hornsey Town Hall, a grand Modernist building, mothballed for a number of years and now temporarily back in active service as an arts venue. This unique event, named DecoDanse, is the creation of Sharon Robinson, and it is happening as part of Crouch End Festival which runs from the 5th to 14th of June. The occasion promises to be grown-up and divinely decadent, rounding off the final Festival weekend in style. Tickets are available at the bottom of the page.

I’m not surprised Sharon has dreamed up this extravaganza as she’s a fountain of ideas. Mention to her a vague plan you’ve had for an event – any event –  and you can almost see her mind click and whirr into action as ideas tumble out, one more fanciful than the next. Only they’re not purely fantasy as she’ll whizz into action and make it happen. I asked Sharon about her influences, and what lead to the creation of such an imaginative occasion:

For Crouch End Festival 2014, you organised a literary event – was that the catalyst for DecoDanse?
Yes. I really enjoyed organising the Clocktower Desert Island Book event which I’m repeating this year as part of a literary day on Tuesday 9 June (details will be up on the Crouch End Festival website soon). I got chatting in the pub after the first Festival meeting for this year and the idea for doing a Steampunk/Cabaret event was born. I think all the best ideas start off as conversations in a pub!

How did you get involved?  Since volunteering with Crouch End Festival last year I’ve met many interesting local writers, artists, musicians, café and venue owners, and of course the festival directors and volunteers. My background is in communications and I’ve organised conferences and events – dealing with politicians, authors and commentators. But I’ve never put on a cabaret or music event before. And the lovely people at the Hornsey Town Hall Arts Centre where DecoDanse is being held are super supportive.

Do you go to a lot of events around London?  I love immersive theatre – Punchdrunk is a favourite. I saw an adaptation of Philip Pullman’s Grimm Tales for Young and Old which I thoroughly recommend and am soon off to see Alice’s Adventures Underground at the Waterloo Vaults.
There are so many strange and interesting things to do around London. I’m trying to improve my drawing at the moment and go to life drawing classes at the Exotique Drawing Salon http://www.exotiquesalon.com/ in Shoreditch where famous burlesque artists often model. I’ve also learnt a lot about the unusual and hidden histories of London at the monthly Salon for the City http://salonforthecity.blogspot.co.uk/ at the Westminster Arts Library. I go to a lot of cabaret – London Wonderground at South Bank, House of Burlesque, La Soirée, Black Cat Cabaret, the Boom and Bang Circus and Late Night Shop Cabaret.
Of course Gourmet Gigs wants to know about your musical influences…
Well due to my mum, I’m a big fan of Ray Davies and the Kinks who have their roots in North London. David Bowie obviously, but I think he is for most people. And 70s Roxy Music. I recently met Brian May from Queen and was lost for words in the presence of a guitar legend.
I was quite young when punk started but remember being fascinated – especially after the Sex Pistols swearing on Bill Grundy’s Today show (with an early appearance from Siouxsie Sioux though I didn’t know it at the time). But I’m really a post-punk girl and still maintain that 1978/79 were the best years for music! Even though the music industry was very sexist back then, there were some really strong female role models around – Patti Smith, The Slits, Poly Styrene from X-Ray Specs, Kate Bush, Pauline Black of The Selector, Chrissie Hynde, Debbie Harry and of course Siouxsie. Later on I got into New Romantic, goth and Indie music and was obsessed with David Sylvian and Japan for a while. Oh and I had a rave phase in the 1990s! Though my taste in music is now hugely diverse, those early influences have stayed with me.
What floats your boat at the moment?   I’m into all things gothic. A recent horror film course I took has further spurred my interest. I love early silent movies such as Metropolis, Dr Mabuse, The Cabinet of Dr Caligari and Nosferatu (who incidentally is putting in an appearance at DecoDanse courtesy of Arran Shurvinton) and my favourite book is The Bloody Chamber – feminist gothic fairytales by Angela Carter. I like the graphic novels of Neil Gaiman and also Alan Moore, which led me on to discovering Steampunk literature and I started attending Steampunk events to see my favourite chap hop stars Professor Elemental and Mr B the Gentleman Rhymer. I’ve been standing on the periphery of the Steampunk scene for a while now but have decided to jump right in and become more active.
As DecoDanse is being held in an art deco building and due to my love of 1920s flapper fashions, Tamara de Lempicka’s art and Weimar Cabaret – the obvious theme that emerged was fusion Steampunk and Art Deco. A little research revealed that Decopunk already existed! A sleeker and chrome-plated version of Dieselpunk. And it also give me the excuse to add Electroswing to the programme (a fusion of jazz age and 40’s swing tunes with electronic dance music). There’s a lot of crossover between cabaret, Steampunk and electroswing – it really is a winning combination.
Can you reveal one or two acts on the lineup at DecoDanse who you are extra thrilled about?
We have such a tremendous line-up that it’s impossible to single anyone out. I have to give a big shout out to Miss Von Trapp who was instrumental in getting all the acts on board. It’s also great that Fay from the Mysterious Freakshow grew up here as did Mel Hadland from The Copperfield Ensemble Project. And Robin Stevenson, who runs the café at Hornsey Library and is a very talented artist, will be DJing and organising Tea Duelling competitions.
We’re lucky enough to have the gin-drinking darling of dark cabaret, Joe Black as our special guest. Another star of the show is the venue itself, The Town Hall which is being restored by the Hornsey Town Hall Arts Centre and being brought back into community use. DecoDanse is going to be so much fun. I really can’t wait!
DecoDanse is part of the Crouch End Festival, June 2015..
Saturday 13 June 7pm til late, Hornsey Town Hall
And if you’d like a preview of what’s in store, one of DecoDanse’s stars, Miss Von Trapp will be performing with The Wattingers at Hornsey Town Hall on Saturday 2 May. Come along and sample this intriguing combination of dark vaudeville folk and steampunk slaughterhouse blues:
IF YOU LIKE THIS BLOG POST, PLEASE ‘LIKE’ OR EVEN BETTER, SIGN UP TO MY BLOG!! THANKS