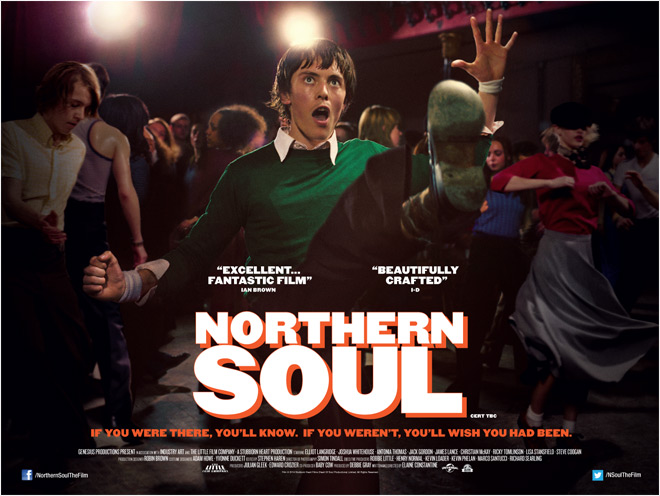 “I’ve never seen so many weak bladders,” said my partner, as yet another silhouette shuffled out, blocking the screen during Northern Soul, the film. “It’s because everyone here is of ‘a certain age'”, I replied. Indeed, about 90 per cent of the audience did look as if they could remember Northern Soul first time round.

Since Northern Soul’s heyday in the 1970s, the movement has been a continuous presence on the music scene, sometimes it bubbles under, then resurfaces again. At its heart are the devotees, the all-nighters and all-dayers, and any numbers of Northern Soul nights up and down the country. This summer at Festival No 6 I took myself off to a Northern Soul dance class, imagining I’d be with a few others set on mastering those twisty-footed steps. Instead, I found myself joining a queue of hundreds, far too many to fit in the room; eventually many of us were turned away. A good sign for Northern Soul, though.

Elaine Constantine‘s film Northern Soul has been brewing for a long time (it was originally to be a documentary) and she has obviously gone the extra mile to get all the elements right. The film is set in a typical ‘grim up north’ town, with its back to back terraced housing looking as if it’s on the point of being bulldozed, filled with a cacophony of 70s wallpapers. The film is shot by Constantine in a soft, murky light for an authentic period feel. The story follows John (Elliot James Langridge), a teenager with home and school problems. At the end of a first visit to his local youth club, where a few teens dance in desultory fashion to Cliff Richard’s The Young Ones, he encounters Matt (Josh Whitehouse), a lover of black American soul. It is as if a light goes on in John’s brain, and this incident marks the beginning of his identification with the Northern Soul scene. So begins a life of dancing, buying the right clothes, a burgeoning love interest, Angela (played superbly by Antonia Thomas), and an introduction to amphetamines.

Fairly early on in the film, John is invited along in a plan to go to the US, to Detroit, where warehouses of long-forgotten soul vinyl await, ready for the boys to spirit it back to England where it will be appreciated, played on the dance floors of Wigan Casino and all the other meccas of the movement. Their dream – America. The boys get their passports, if only they can save enough money they’ll be on that plane. Of course the dream never happens, it gets buried along the way, under the mess of drugs and all that entails.

The drug downward-spiral element of the film did dominate a little too much as the storyline developed, but Northern Soul is an engrossing, beautifully-filmed work, made by someone with such passion for the time and – most importantly – authenticity. What is evident is where Constantine’s heart lies: in the music. The extensive soundtrack of American soul is a labour of love, and she nails the euphoric, anything-could-happen dance-floor atmosphere, along with the 70s fashions and hairdos. During those dance-floor moments, I wanted to freeze the frame, and take in every lovingly put-together outfit, every bomber jacket and pair of baggies, every back-combed hairdo. And then I just wanted to walk right into the screen and join in with the dancing. That’s what the film does to you.

Northern Soul is showing now around the country.

One thought on “Northern Soul – the film”