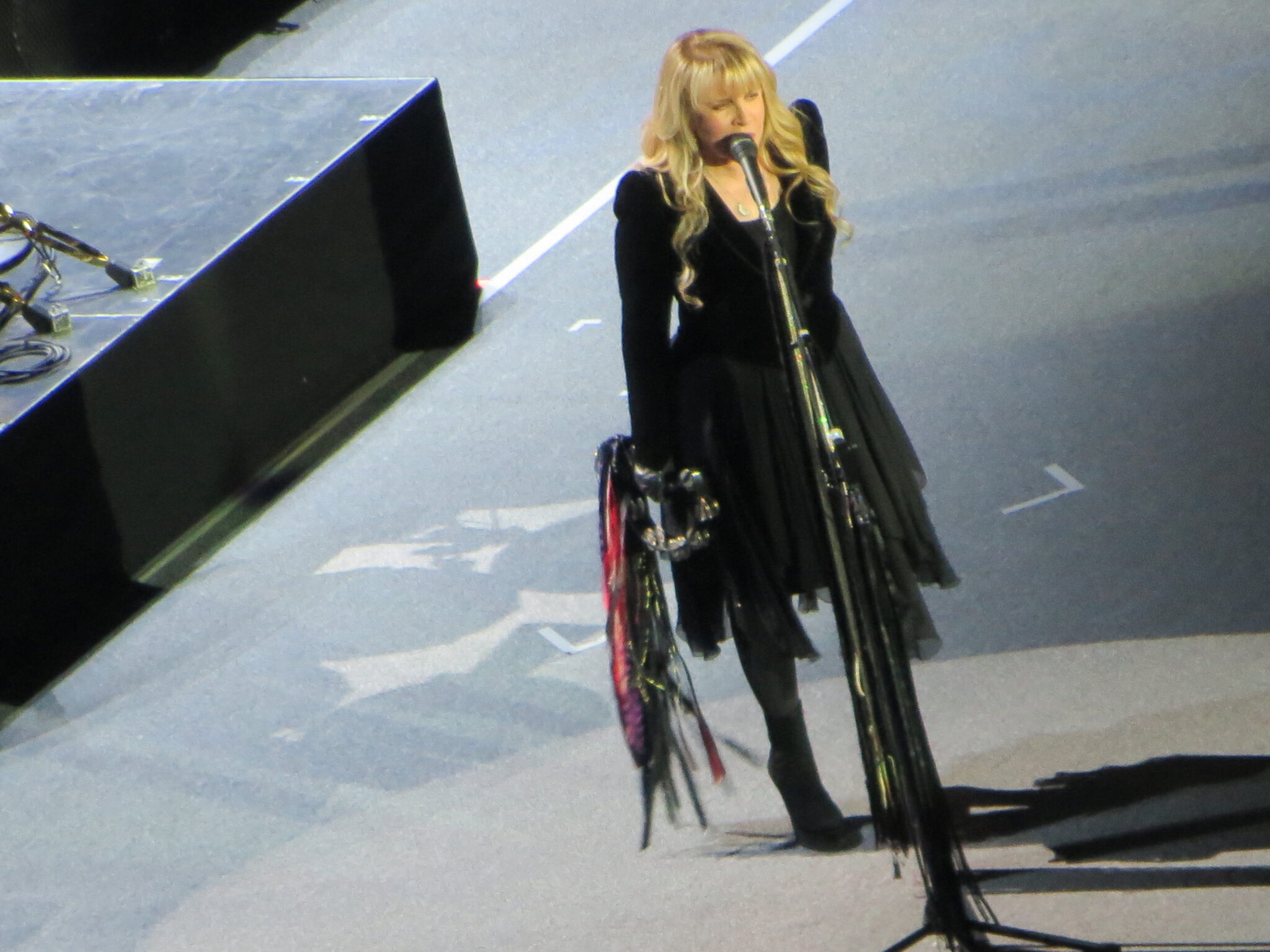 One of my earliest music memories is Peter Green singing Need Your Love so Bad, and his own composition Green Manalishi (with the two prong crown), which to my pre-teen brain sounded bewilderingly mystical. Strange to now see Fleetwood Mac, in their present form, live in 2013, over 30 years later.

Mick Fleetwood and John McVie command the audience’s attention as the band opens with Second Hand News. This position is swiftly usurped by flamboyant performers Stevie Nicks and Lindsey Buckingham. Nicks and Buckingham: the two former lovers hold the audience’s attention throughout the performance, their body language indicating that drama, tension and chemistry are alive and well. We can only watch and make of it what we will. Lindsey periodically moves to the front of the stage, crouching down with his guitar, to the obvious delight of the fans clustered at his feet.

Stevie Nicks has, gratifyingly, lost none of her hippy charm, she’s all drippy scarves, butterfly gestures and long hair (at 65 – yes, it still looks great). A tanned Lindsey Buckingham looks as if he’s been whisked straight from a California health spa.

The Chain and Dreams satisfy some of the craving for old material before Buckingham introduces a recent number, Sad Angel – it sounds classic Fleetwood Mac in structure. This is followed by the glorious Rhiannon. Nicks adapts the key to suit her voice, which is now less capable of hitting the high notes. However, as the concert unfolds, her voice appears to gather strength.

Buckingham announces they’ll be playing some numbers from Tusk – this includes a clunking version of Not That Funny which, with the overriding drum beat and shouty voices, just doesn’t come together. 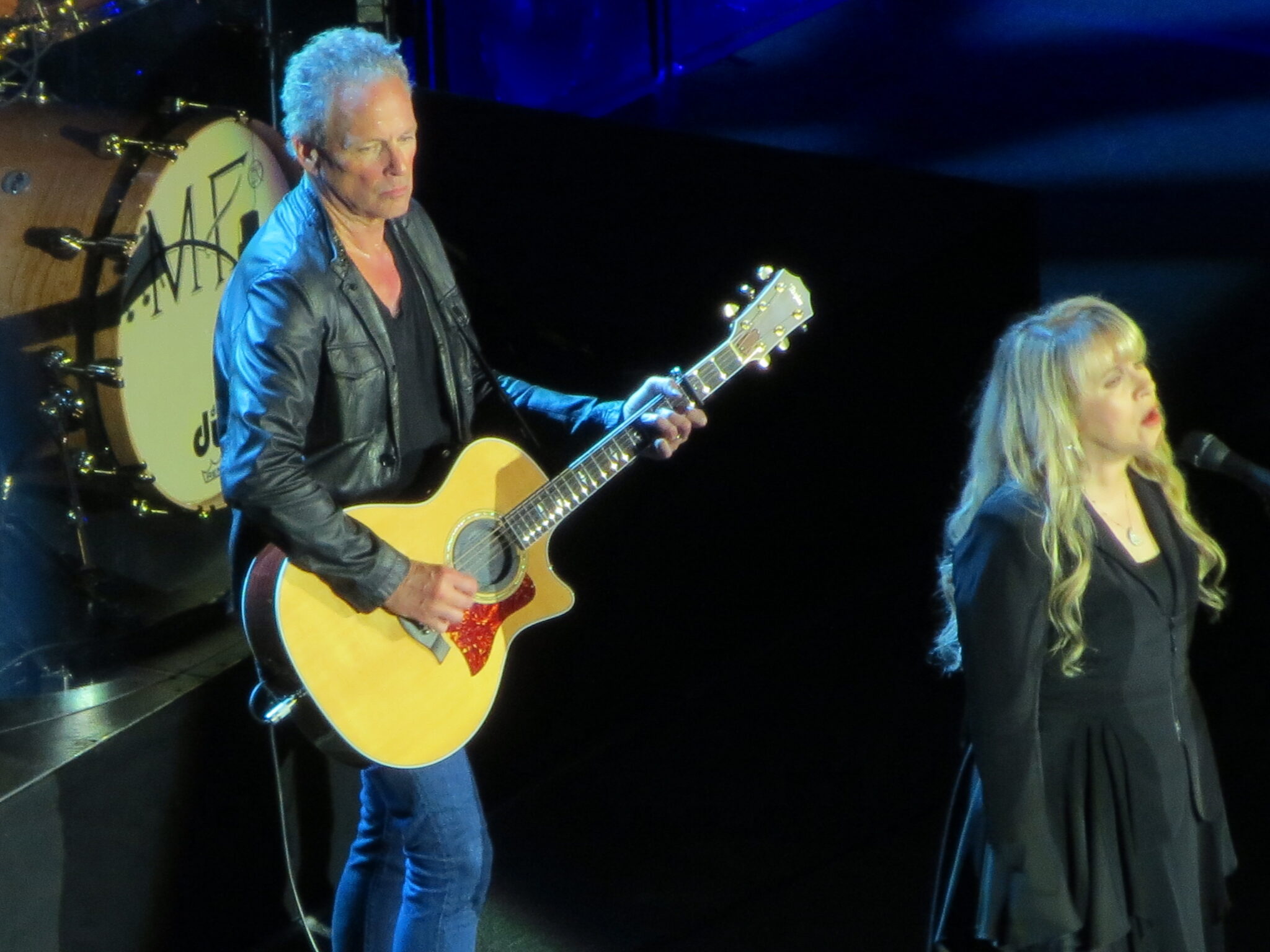 It’s no secret that Christine McVie is scheduled to make an appearance, although it seems like tempting fate to presume it will happen. And when Nicks dedicates Landslide to Christine, a ‘sweet girl, like a sister’ I did wonder if that was a substitute for her appearance.

Never Going Back Again is rendered playfully, with Buckingham slowing the folky guitar riffs right down – his guitar playing is superb, supple, assured, with a perfect sense of timing and control. Another highlight of the evening is Gold Dust Woman  – giving full weight to Nicks’ throaty and more ‘country’ vocals, and its powerfully dark lyrics.

The gig is almost drawing to a close when there’s a short introduction and Christine McVie joins her former band members on stage, to predictably rapturous applause. She plays keyboard and sings for one number – Don’t Stop. Her voice sounds as it did all those years ago. It feels like a special and very emotional moment.

Buckingham introduces the final song, a number he wrote 10 years ago, appropriately enough called Say Goodbye  – it’s about illusions, about letting them go in order to grow.

An inveterate gig goer, I have, nevertheless, never set foot within the O2’s portals, well, not since it was The Dome – a sort of kid’s adventure learning space – back in The Millennium. And if Fleetwood Mac would only play downstairs at my local pub I wouldn’t have had to venture there at all. However, the acoustics were excellent, seats relatively comfortable and the view unimpeded – I was on the 4th level up. It’s still a soulless way to experience music, though. And despite the £90 price, it seemed there were several who were there to drink, talk loudly and pay scant attention to the music.

Travel Next to North Greenwich tube station on the Jubilee Line.

For more, check out my About Me page here