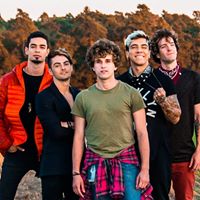 They call their music ‘pop soul funk’ – and the Brazilian outfit UP N GO play Nambucca in London. It’s  their second performance as they played a last-minute set at Ronnie Scott’s jam session, where the band got to show off their versatility with a set of covers to suit the jazz and blues evening (such as Amy Winehouse’s Valerie and Etta James’ At Last). London crowds are known for being a tough nut to crack but UP N GO proved to be a big success.

UP N GO’s five members got together in Brazil in 2013 and have played fairly consistently in Belo Horizonte (their home city), Sao Paulo and Rio de Janeiro. I asked the band’s vocalist Luccas when he started songwriting: ‘I started at about 15, but professionally speaking, I’ve been writing for the band since 2014 and we’ve been perfecting our sound since then.’

Despite the pop soul funk tag, there’s a distinctly Brazilian feel to their sound although Luccas explains they sing in English to widen the band’s appeal – the band have their sights on a global audience. Rhythms such as Bossa Nova and, most distinctly, the percussively driven and slinky baiao are part of their music, making UP N GO impossible to sit still to. ‘We’re bringing something different,’ Luccas adds, ‘mixing up the genres.’

I asked Luccas which artists have primarily influenced the band? ‘High up there is Michael Jackson. And we also love Bruno Mars and Maroon 5.’ The band direct me to a video of Olodum’s Michael Jackson.

For their first European foray, the band and their small entourage flew over from Brazil to Germany, where following in legendary rock n roll footsteps, they rented a couple of campervans to get them to their gigs across Europe. Catch them at Nambucca in north London for their sole UK performance before they head back on the road for their next stop in Portugal.