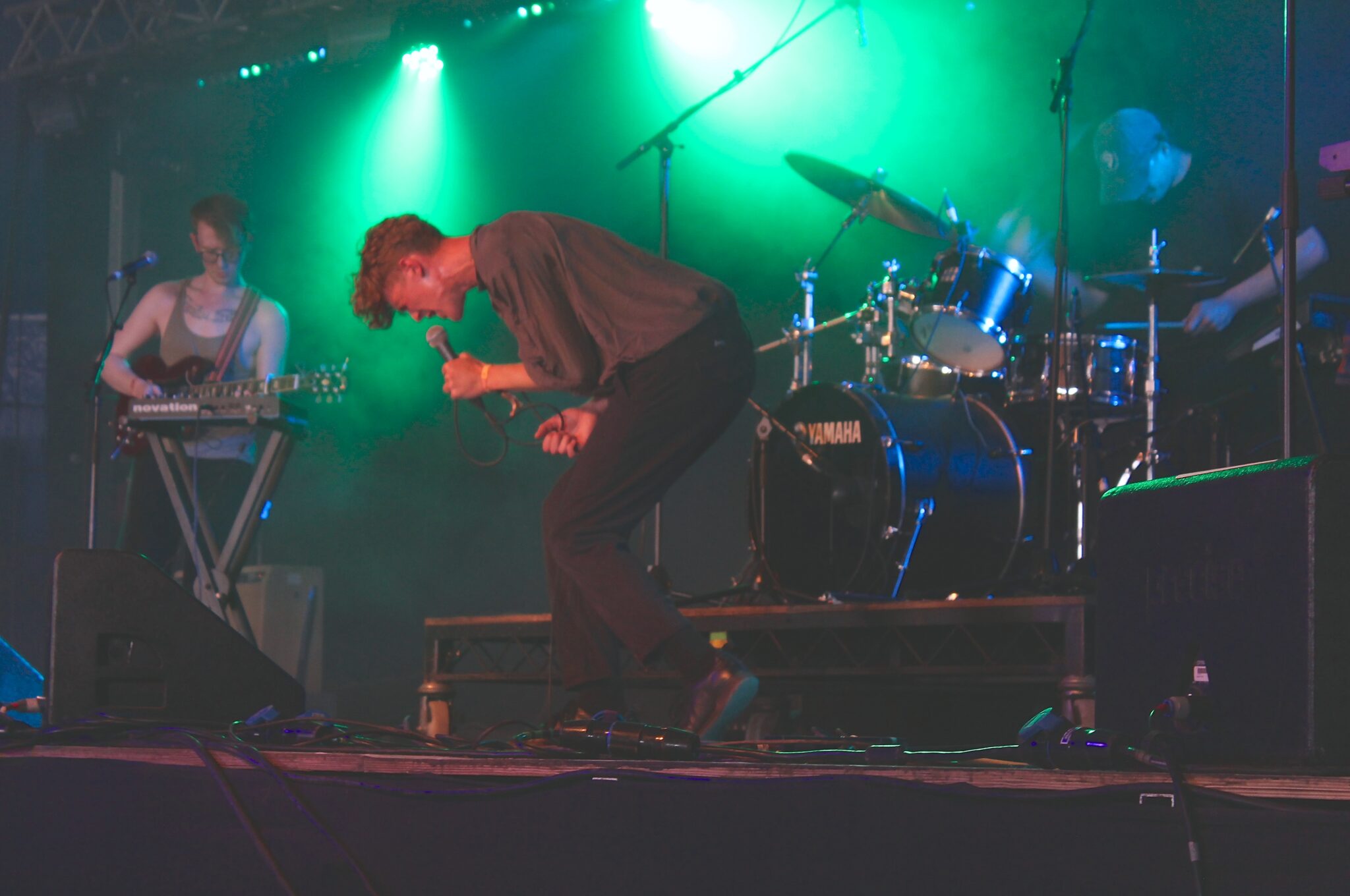 2017 has been more than a ‘best albums’ type of year. Not that there has been a dearth of great new releases, with Jane Weaver and The BJM amongst several faves, but those “best of” moments have been more diverse: single releases and emerging artists with a promise of more to come for 2018. There’s a noticeable Northern flavour to the list too.

This somewhat mystifying and lowkey Manchester collective (named after a Chinese restaurant) popped up on the summer festival circuit after forming in 2016. A fog of moody intensity surrounds their live performance, their dense and slightly sinister muscular psychy numbers. Live, this band should only be witnessed through a haze of smoke machine. They’ve put a raft of northerly gigs on their agenda with new offering WANT recently appearing on Spotify. Their festival appearances indicate W H Lung already have a wealth of material so let’s hope there’s an album on the way soon. Look out for W H Lung in 2018.

Ex Elbow drummer Richard Jupp, in collaboration with ex Doves Martin Rebelski plus Mike TV and Ollie Collins played a couple of gigs as Rogue Emperor before closing Bluedot festival in a small tent while Alt J commandeered the main stage. They started late with sound problems, while the band looked tense and grumpy before unveiling one of the most uplifting performances which left the crowd in a swooning mass. One part Hacienda, one part the smokey, yearning wistfulness of Doves. And since festival season has drawn to a close, sadly there’s not a peep from the collective. Martin Rebelski has played keyboards with Peter Hook on his most recent tour so no doubt band members are busy elsewhere. So I’d recommend you enjoy what little there is out there and, just, well, keep fingers crossed for more in the future.

I’ve been a fan of The Orielles‘ surfy garagey sound and shimmery vocals for a while, and now they’ve signed to Heavenly Records there’s a new confidence and willingness to experiment, witnessed in their latest raft of material. They appeared as part of Heavenly weekender at The Trades, Hebden Bridge, back in January and closed the set with the powerful, proggy and playful Sugar Tastes like Salt which fairly blew me away, a finely structured eight minutes of groove. Let Your Dogtooth Grow is the new single and album Silver Dollar Moment comes out shortly.

If The Brian Jonestown Massacre are your thing, this is exactly what you can’t get enough of: deep, dirty, hypnotic grooves with a Krautrock feel: the band are now recording in their Berlin studio. The divine opener Open Minds Now Close positively shimmers, over eight minutes to get utterly lost in. Deep vocals over what sounds like a cuckoo – and no I’m not under the influence of any substances. Tess Parks on Throbbing Gristle sounds like Nico – monotone menace over a thick sludge of guitars. There’s an occasional number on Don’t Get Lost that I confess to skipping over such as the turgid Charmed I’m Sure.

Weaver’s new album Modern Kosmology is an intelligent and thoughtful exploration of ideas; Krautrock influence as on Slow Motion and The Architect and a touch of Sonic Youth on the beautiful Did You see Butterflies. There’s a shift from 2014’s The Silver Globe, although it’s still spacey with those lush, ethereal vocals, this is a more experimental album and less immediate but once you’ve heard it a few times, Modern Kosmology gets under your skin. This is a perfect album for solitary moments in contemplation, but it fairly rocks along when you see Weaver perform live.

Drahla: When I saw this Leeds outfit accompanying Amber Arcades last year I was knocked out by their ballsy retro sound, there’s more than a touch of Sonic Youth about them too.

Ian Felice: In The Kingdom of Dreams

Richly gorgeous plaintive poetry from a Felice brother on a solo album. Exquisite and deeply evocative language, this album expresses those anxieties of what it is to be an American, especially as a new father in these challenging times.

Thievery Corporation: The Temple of I & I. The collective appeared at The Roundhouse earlier this year for a knockout performance, this new dub reggae collection doesn’t exactly push the boundaries but displays TC’s superb talent for global influence over a particular genre.

British Sea Power: Let the Dancers Inherit the Party contains those uplifting moments that BSP can inspire, in spades. Bad Bohemian is lush and poppy, likewise International Space Station with its “to the moon and the stars” refrain. Only one dud track: the clunky Sechs Freunde. There are plenty of numbers on Let the Dancers that already feel like BSP classics.