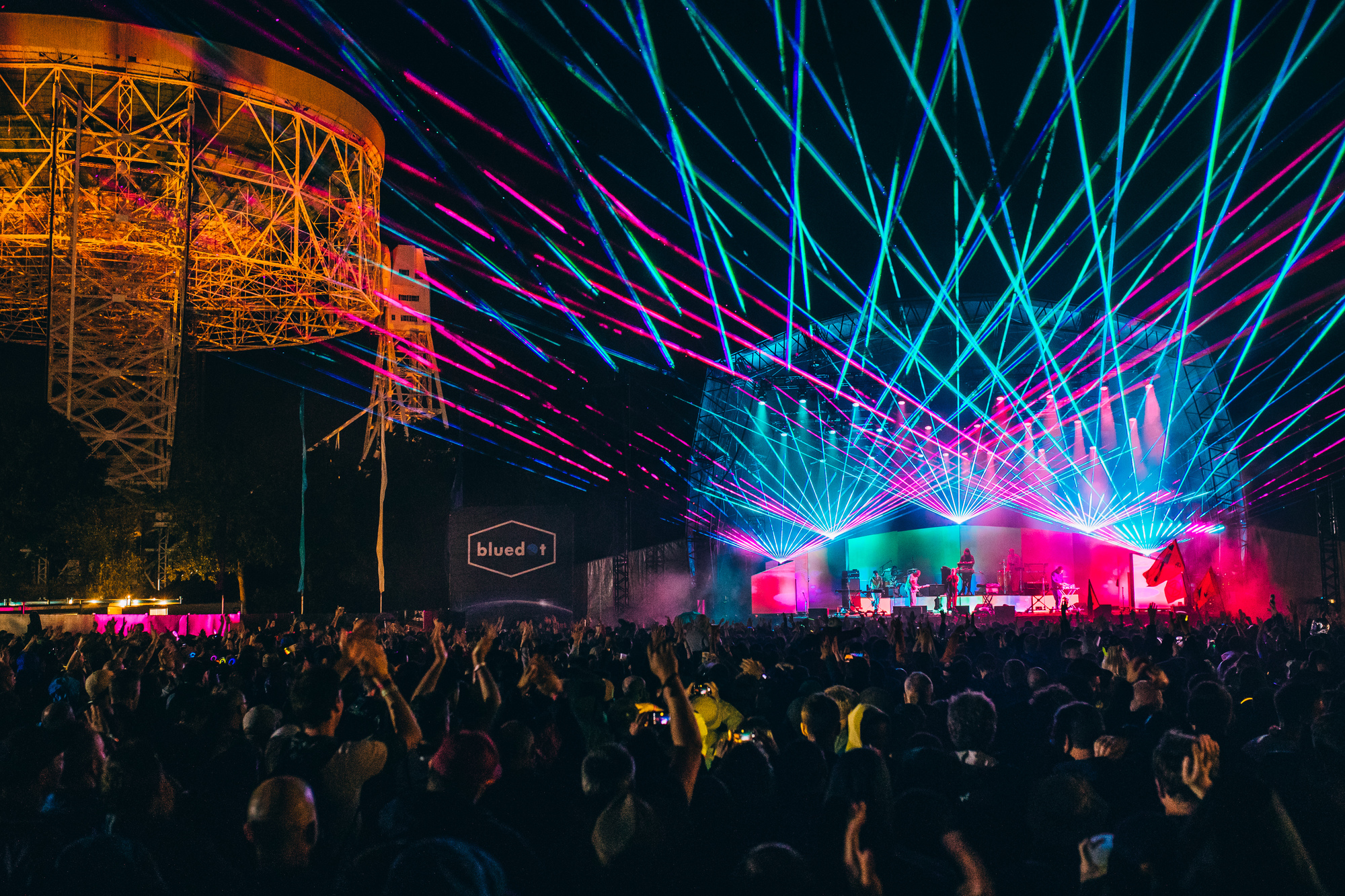 If the scientists at Jodrell Bank could put their collective heads together, it would be perfect if they could find a way of teleporting us back to the fields of Bluedot in order to do the festival all over again. That way it might be possible to experience the stuff you’d missed first time round. Bluedot is a clashfinder nightmare.

First impressions are that there have been some positive improvements to the site. You can now walk in a complete circle round the site with the telescope in the centre. Most of the science activities had decamped to a separate area away from the music, while the main arena was a dedicated music zone. There was also a new dance tent: Deep Space Disco which had optimistically programmed DJs from 12 noon – fortunately there was a ready supply of enthusiastic souls ready for a post-breakfast dance at DJ Nicholas Mai‘s upbeat set (he also played two other stages over the festival) – and the Big Fish Little Fish family rave. The food stalls were better organised and grouped into areas too.

Only last week, the Lovell Telescope got its UNESCO heritage status and Jodrell Bank Professors Tim O’Brien and Teresa Anderson conveyed their pride in the accolade at their talk on Thursday. The festival also coincided with the anniversary of 50 years since the Moon landing. 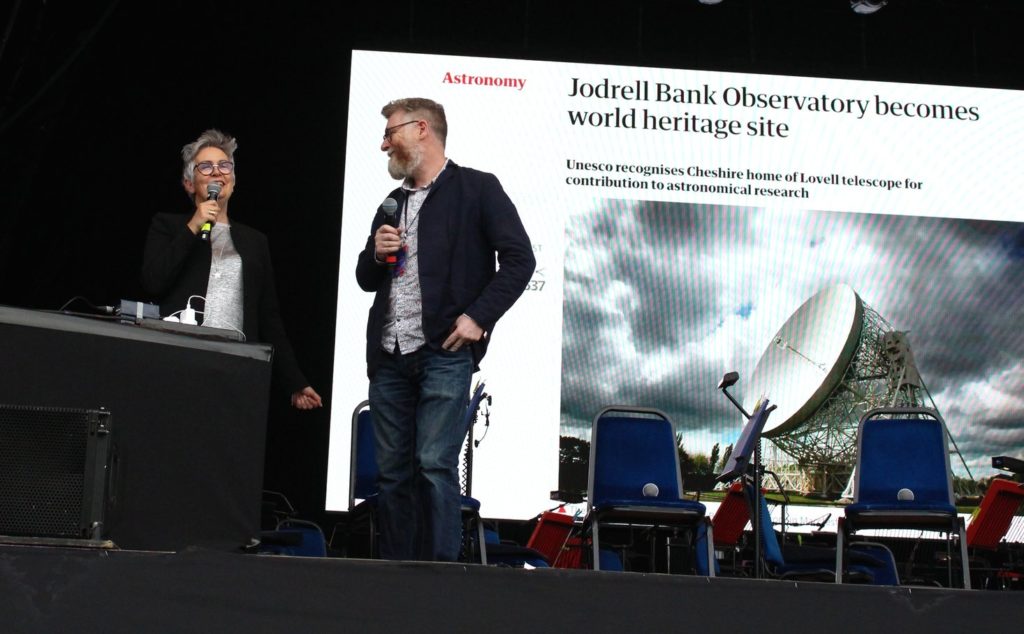 A mini debate followed: Science fiction, Science fact. Professor Monica Grady made a case for Asimov and Terry Pratchett. But Libby Jackson and the ‘fact’ side won me over. Most fascinating moment? Hearing about the mini-sized 3D printer that will be going up to the moon. Using a shovel attachment it will gather moon dust to build panels for buildings… and anything else we need. Making things on site is the way to go.

Manchester’s Hallé Orchestra blasted off the main stage action with a collaborative piece called Lift Off. The work is a collection of sci-fi-related music such as Star Wars, Dr Who, ET and Back to the Future. The beautiful backdrops looked even more dramatic as dusk fell over the Bluedot site. Opening the festival with the Hallé adds a sense of grandeur and it all felt like we were there for a very special moment.

No prancing about barefoot on springy green grass, as the rain belted down. The Nebula stage hosted a BBC Music Introducing series with first artist Re:tract, a project by production artist Matt Gill. It was a beautiful set with deep, lush soundscapes, moody and languid.

One of the most eagerly awaited events saw a packed-out tent for a talk by Helen Sharman, the first British astronaut. Helen described how it all started: driving to work at the Mars chocolate factory she heard a radio advert asking: “would you like to apply to be an astronaut?” She wavered, then applied, and got the job. Helen was an entertaining and compelling speaker, offering snippets of info about life spent floating in a tiny space capsule. The best thing? Weightlessness, of course! Not so much fun? Learning how to survive in water for three days in case they made an emergency landing somewhere obscure.

Hot Chip were peerless Friday night headliners, with a stunning laser show (see main picture). They opened with Huarache Lights and covered old nineties dance classics plus a handful from their superb new album A Bathful of Ecstasy.

“Attention Earth! This is Henge. We come in the name of rave.” Henge, festival set experts, put in one of the most entertaining and amusing sets and got the main stage action going.

Has Bluedot’s music lineup featured a theremin before? With its sci-fi electronic retro credentials, this instrument from the 1920s is a natural for Bluedot. The Radio Science Orchestra presented their composition Man out of the Moon; probably one of the most quirky events and one of the most lyrical and lovely. With the soothing sound and retro visuals of 50s American suburbia, I felt transported to a glamorous hotel lounge, elegantly sipping a Martini.

The arena was packed for Jarvis Cocker with new project JarvIS. Everything on stage was in place: his musicians, smoke machine on overdrive. But where was the man himself? We waited. One press photographer turned and faced the audience, camera clicking away. Did he know something we didn’t? Something was causing a stir in the packed crowd…  suddenly we spotted Jarvis, making his way through slowly, microphone in hand. Next minute he had bounded on the stage. Jarvis’s magic star quality remains undimmed. Prowling the stage, posing, languidly stopping for a bit of banter, he took us through some of the new material he’s been concocting including the new single, destined to be a classic, Must I Evolve? 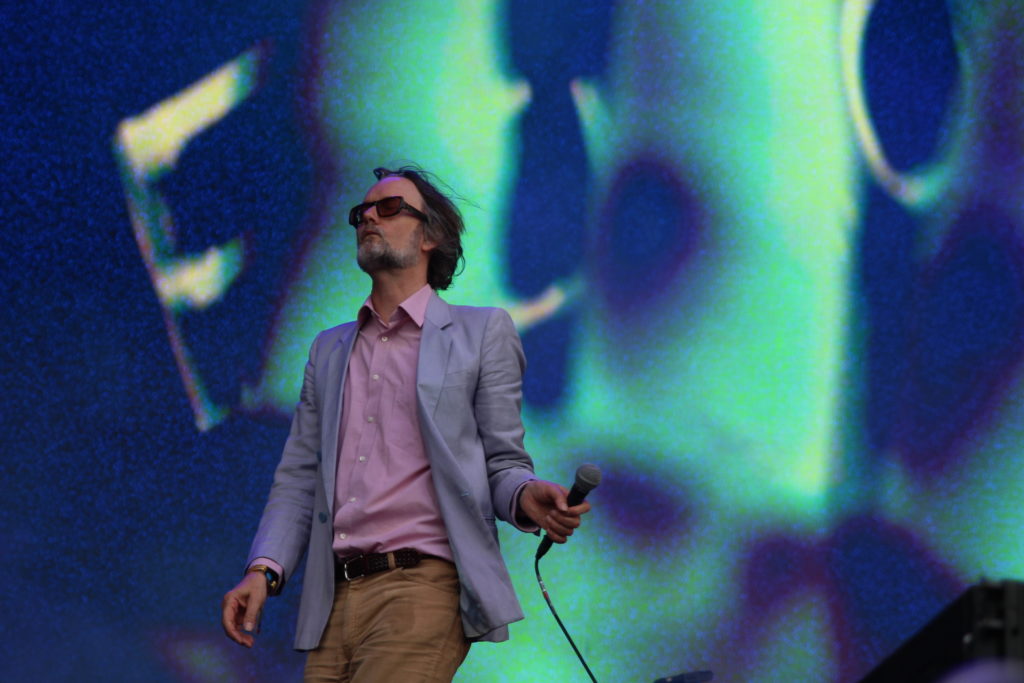 Under the shadow of Kraftwerk’s impending appearance, young West Yorkshire band Working Men’s Club attracted a substantial crowd. They played a full-on noisy set of jagged post punk, including catchy first single Bad Blood – but just as things were going so well, it was suddenly curtailed to make way for the headliners. Post-festival interview with WMC here.

Seeing Kraftwerk live was a lifetime ambition for many people I spoke to and the arena was buzzing. The German godfathers of electronica hit the stage with visually exciting backdrops throughout the set, which were enhanced with our specially produced 3D glasses. Man Machine was the highlight. Kraftwerk were a perfect fit for Bluedot and it will be interesting to see who else they can drum up from electronica’s history.

Bluedot’s music curators made sure there was a dazzling array of genres throughout the festival. For Sunday, there was the intensity of The Lucid Dream‘s churning, mesmerising guitar-heavy psychedelia. Then we moved to hip hop with just in from New York’s sassy female duo Oshun. Their set was a joy, slinky hip hop subtly woven with soul and jazz. 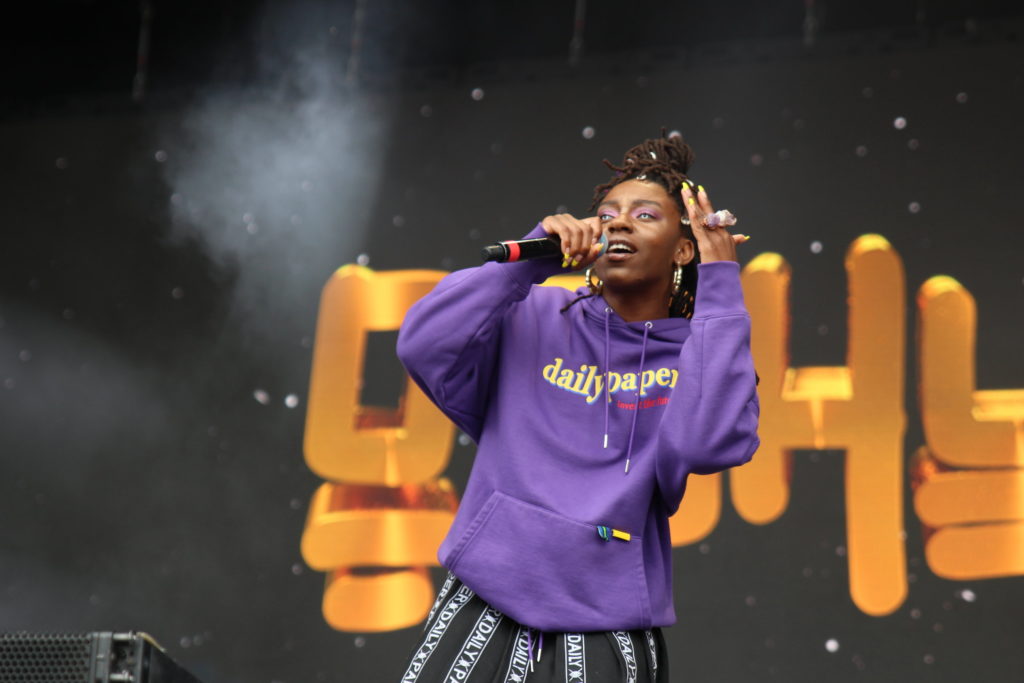 The Orielles brought their perfect, jangly, sunny vibes to the main stage. Whereas one time it was cool sisters Sidonie and Esme who stole the limelight, now Henry is looking equally confident on stage. I Only Bought it for the Bottle and Sugar Tastes like Salt sounded particularly lush. We were also treated to a first hearing of a new song from their upcoming second album which is due for release on Valentine’s Day 2020.

The super-talented and dramatic Anna Calvi played an intense set with her rich, operatic vocals soaring over the arena, Don’t Beat the Girl out of my Boy was a powerful set closer. 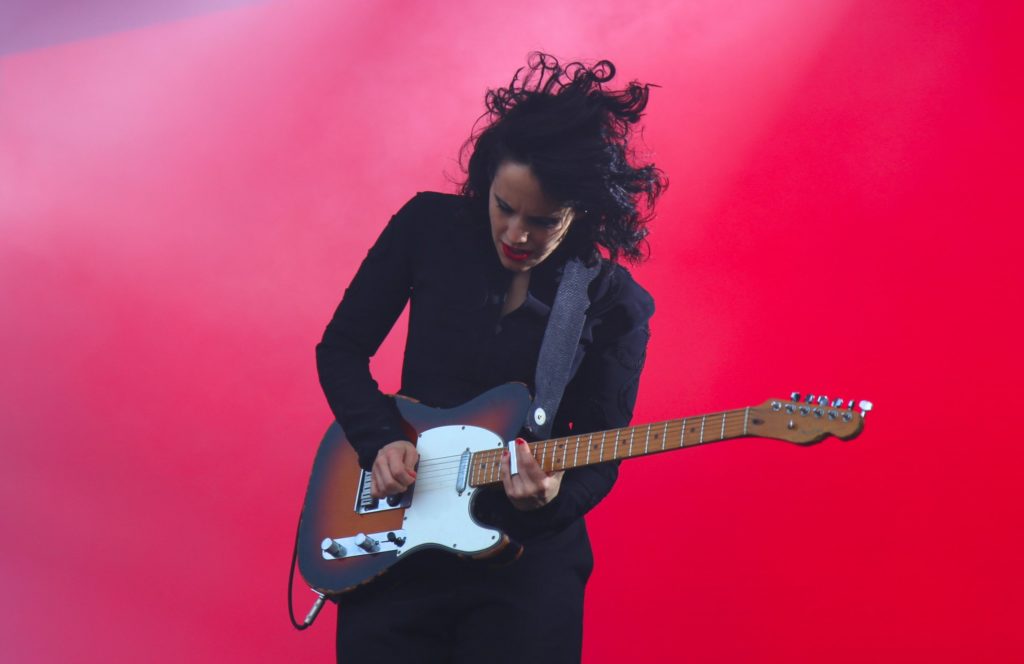 And finally, New Order pitched their closing festival set just right – even though the rain did return on cue as the four walked on stage. Bernard Sumner was delighted to be playing near home and commented on how he’s waiting for a Salford festival (Bluedot, could you oblige?). Returnees to Bluedot, they included two Joy Division songs, following for the encore Atmosphere and Love with Tear us Apart in honour of Ian Curtis. My particular highlight was a blistering rendition of Plastic. It was a beautifully balanced set with a majesty from the start. This closing set was it should be, an emotional and uplifting experience.

The science and space side of Bluedot had just as much going on as the music. There is always plenty for families and the festival make science as appealing and as much fun as possible with workshops, demos, freebies and all manner of information. And there are several shows going on over the site too, including a Fossils show. 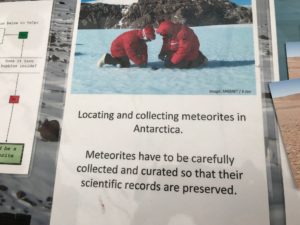 Manchester University brought meteorites to learn about, and children could take part in a ‘meteorite hunt’ where, armed with a magnet, you have to work out which are the meteorites and which are just plain old rocks. 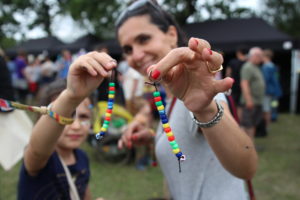 Then you could make a strand of DNA with beads at the University of Liverpool’s stall, in order to understand how genetic code is created.

Also popular was Manchester Girl Geeks, a not-for-profit organisation, providing workshops in coding and other tech for women. At their Stomp Rockets stand you could make a rocket and fire it. Hopefully it doesn’t land on the tent roof, never to be seen again. 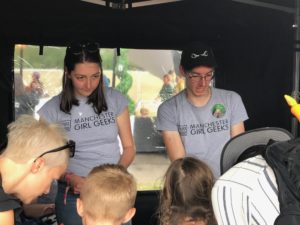 And the Women of Science stall offered lots of info, plus stickers  the chance to get a tattoo of your favourite female astronaut. I am still proudly wearing Helen Sharman on my arm. 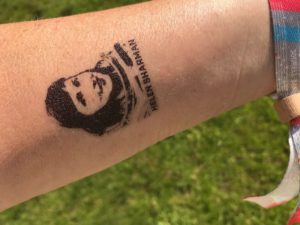 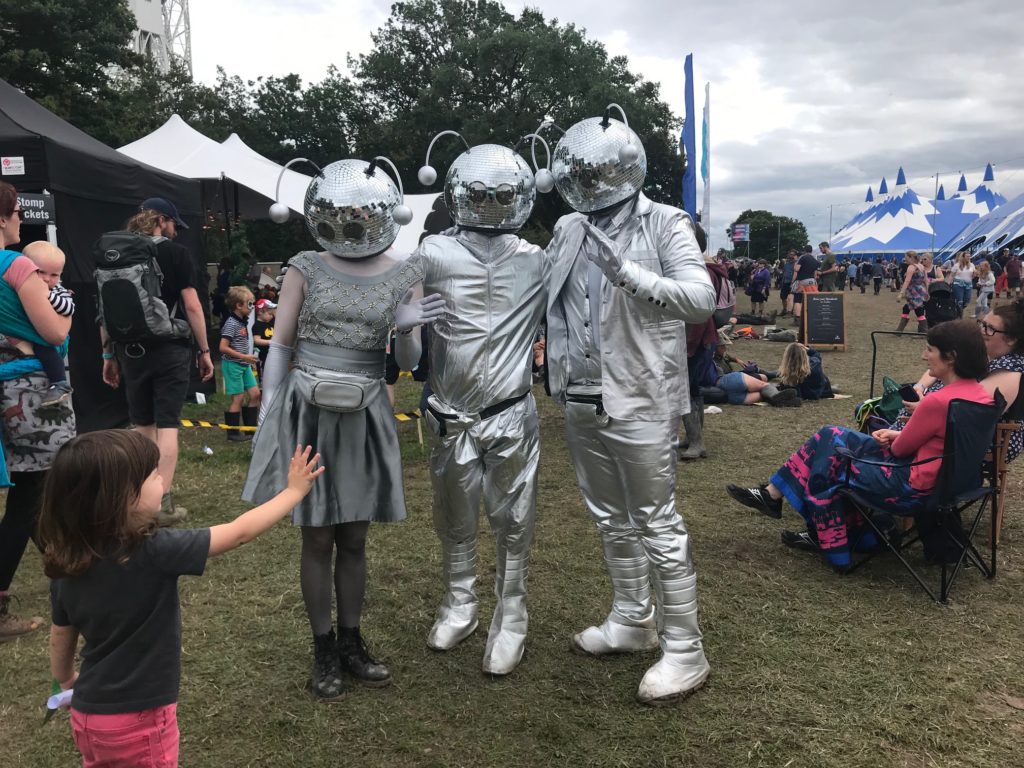 The Roots stage hosted a good variety of music but was perhaps a little under-used this year. It would be good to see this area given a little more love, perhaps with a cafe to add to the chilled and verdant atmosphere of this corner of the festival ground.

The cash-free wristbands were trialled this year and everyone seemed to have strong opinions about them. While undoubtedly a good idea – and they did cut down queues quite dramatically – there were some teething problems.

The Notes stage was a popular spot where a series of poets, writers and debaters held court in a comfortable tent with a cafe. A Manchester poet collective provided much humour and enjoyment on the afternoon I spent in there.

Leaving Bluedot, my head was buzzing with all the information I had learned about space and science. And the music programme was designed to offer not just the familiar, but new and exciting acts too. Our blue dot has much to offer and this festival embraces it all.