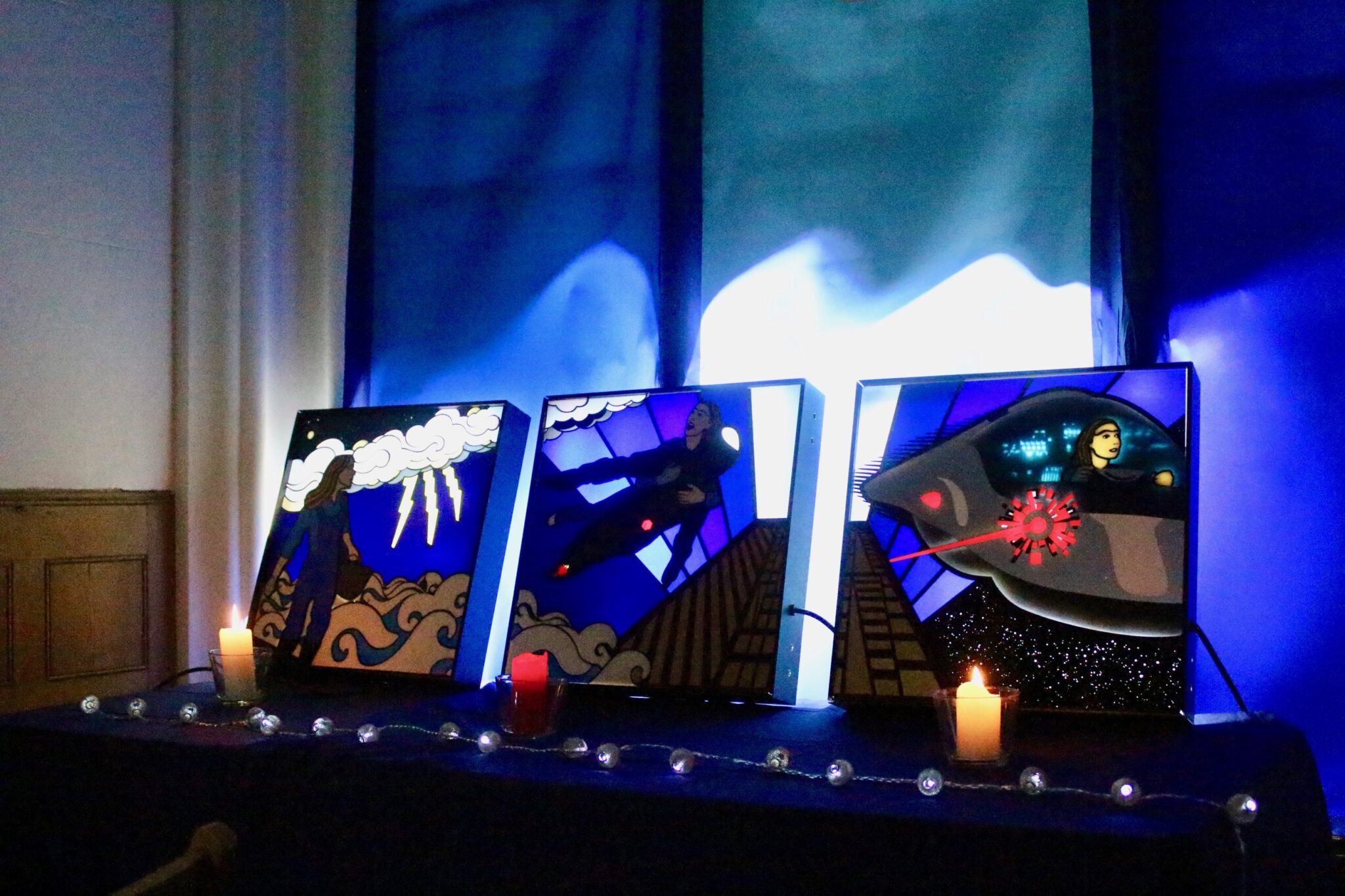 Fred Deakin of Lemon Jelly has released a new work – a double concept album telling a Dystopian tale of The Lasters, Earth’s final family, after climate change has wreaked havoc and the planet is on the brink of extinction. The narration follows the family’s journey – in particular that of the mother and daughter. It is a dramatic tale which is revealed over the course of the four sides of the album. The unfolding narrative involves a civil war and and the Lasters family torn apart – but at its heart, as Deakin explains afterwards, what interested him was the effects on the family, consequently this is very human tale of the bonds that exist between parent and child.

In order to launch this new baby out into the world, the prodigiously talented Deakin (he’s a University Professor of Digital Arts, multi-media artist, musician, DJ, performer) created four listening parties over the first weekend of May. I attended the first one, an occasion we as audience felt honoured to share, the packed room falling silent as the needle was ceremoniously dropped onto the first test pressing of the album. Deakin explained the story’s progression as each side of the album came to a close; fortunately, he tells me afterwards, the narrative will be fully explained on the album cover, as there’s a lot to take in.

I must mention the venue: Deakin had chosen The Intimate Space at St Mary’s Church Tower – the smallest venue in the country. Well, that’s its claim anyway. Picture a north London street where suddenly, set back from the road amongst trees, gardens and greenery, illuminated somewhat creepily by green lights, an ancient stone church tower stands. Enter, and you find yourself in a cosy, welcoming and beautiful space with a gothic arch and tall windows. Atmospheric and, no surprise here, with great acoustics. 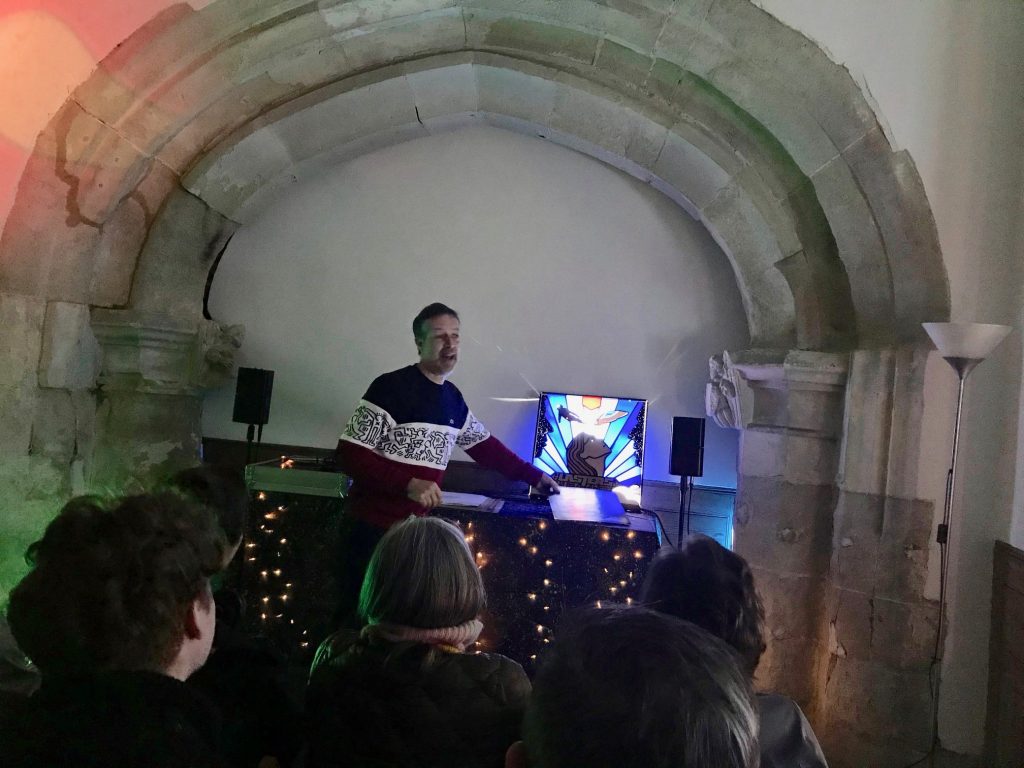 The choice of venue all starts to make sense when Deakin’s accompanying artworks are revealed, a set of intricately constructed lightboxes, reminiscent of church stained glass windows. There’s a triptych of lightboxes placed under the church window (see main photo). These three pictures reveal The Lasters’ unfolding narrative, and they are captivating. Apart from their beauty, they possess an amazingly rich textural quality; one features clouds that are iridescently mirrored, another contains a section which resembles granite, rich with sparkly chunks. These lightbox images will be on the album cover which, although still in prototype form, will be a true vinyl lover’s dream with gatefold and, it is proposed, various popups.

There are four vocalists on the album – Abi Sinclair, Charlotte Hatherley, Steffan Huw Davies and Deakin – all playing members of the Laster family – but it is the female voices that stand out, expressing the turmoil of their flight from Earth. Deakin and Harry – the producer, who is at the listening party – have created a dramatic and moving story in which you can fully immerse yourself (and hear all the lyrics) over the two albums worth of memorable songs. The End of the World is particularly powerful – a plaintive and chilling ballad. The unfolding drama is replete with raw emotion, expressed by the haunting vocals which stay with me long after the evening is over.

The Lasters will be going on tour, details to come.

You can buy the album on vinyl or USB drive at the project website’s shop: http://thelasters.co.uk/shop 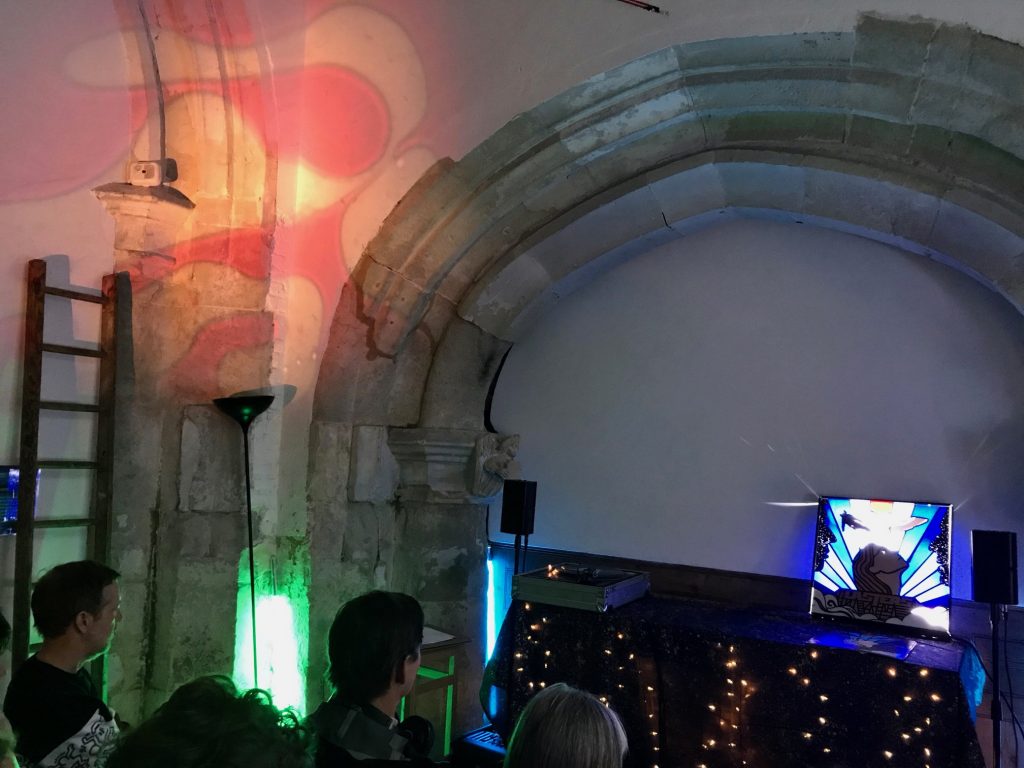