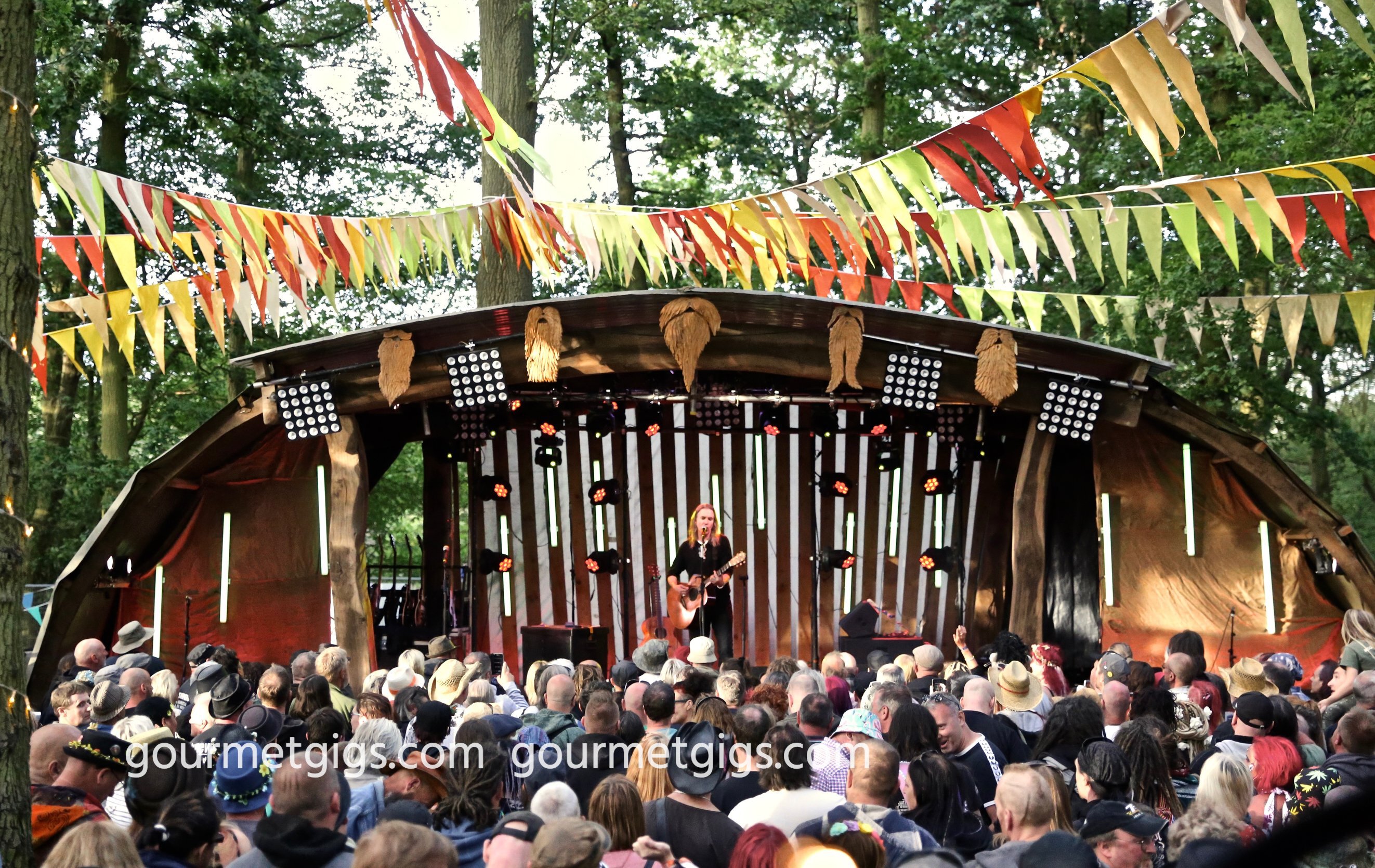 Sitting in the brand new upstairs bar with a cider in hand, we survey the festival scene unfolding. It’s a Bank Holiday, it’s the start of festival season and here we are at Bearded Theory for three and a half days of music and good company. Last year’s woeful traffic queue into the site has been resolved – Bearded even reduced attendance numbers for this year – and everyone I’ve spoken to has got in fairly seamlessly.

Bearded Theory ‘Spring Gathering’ as the official blurb wants us to call it, is small enough to feel more like a big party than a festival. Strolling around the manageable site, it all looks like business as usual with a few tweaks – Magical Sounds dance tent has been moved to the other side of the site (which, in Bearded Theory terms, means not very far) to help with sound bleed. Magical Sounds is not everyone’s cup of tea but for those who love old-school trance and global psychedelia, it’s pretty much heaven. And this year features some star acts such as Transglobal Underground, Banco de Gaia and Dr Trippy.

We drift into the Something Else tea tent on Thursday and catch the fun Cornish band Slack Mallard who play ‘folk with an edge’. Day and night, Something Else is a great little space to sit and chill and inevitably get chatting to your neighbours. The only stress is deciding which cake to pick as there are about 20 flavours.

The first full day of music. We head for the opening band on the main stage, Pattern Pusher, expecting something pleasantly melodic to accompany a beer or two. What we don’t expect is to hear one of the most enjoyable acts of the festival. Pattern Pusher are an interesting and progressive mix of dance music with effective visuals, I’ll definitely be looking out for them again. Next up are veteran ska punk outfit Spunge who are as good as they used to be, according to my Spunge obsessed festival friend.

The Derbyshire air has been fizzing with excitement as local band The Newcranes have got back together. The band, with a new front man, are back after nearly 25 years off the scene and it’s evident why they are so fondly remembered, it’s an energetic set. Amazing to think that at one time they supported Bob Dylan. 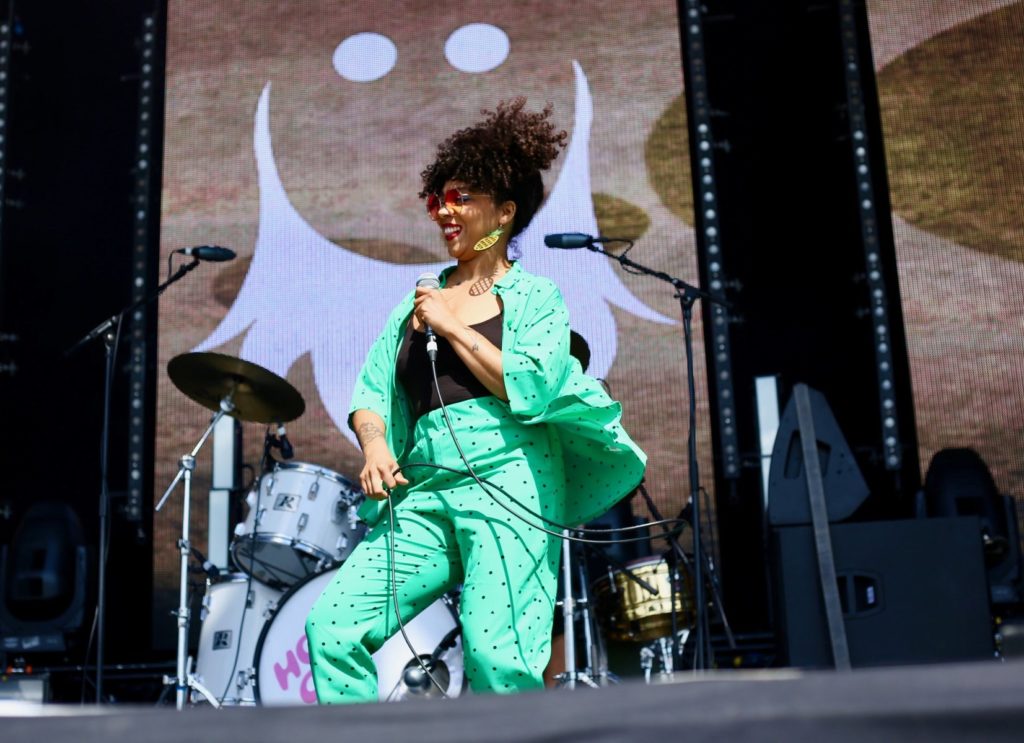 Back on the Pallet stage, Hollie Cook and her band of top-notch musicians play a mid afternoon set – she hits us up with some cool reggae with a punk edge, very slinky stuff to get the afternoon crowd dancing. Although it’s disappointing to note that Hollie is one of only a very few female artists on the lineup this year.

New Model Army are favourites at Bearded Theory… but they’re not playing this year. Anyone suffering NMA withdrawal symptoms can get their fix at the Woodland stage where Justin Sullivan puts on a rare solo set.

As evening falls, Editors take to the stage for their much-anticipated Bearded Theory debut. Editors are a powerful band live, due in part to the distinctive vocals of Tom Smith. 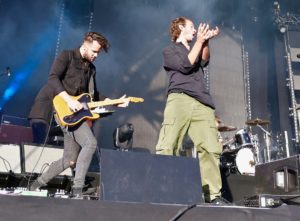 They prove to be one of the highlights of the festival, delivering a well-paced set covering much of their material and ending on a high with a new song. It’s not even on the new Blanck Mass-produced album – an upbeat track called Frankenstein. Quite bold to end with a new track but Editors nail it.

Friday closes with Suede… the smoke machine is on overdrive and Brett Anderson is in excellent front man mode. The set is a reminder of just how many hits Suede released in their heyday. However the set flags slightly in the middle but towards the end everyone rallies for the final few numbers like Animal Nitrate. 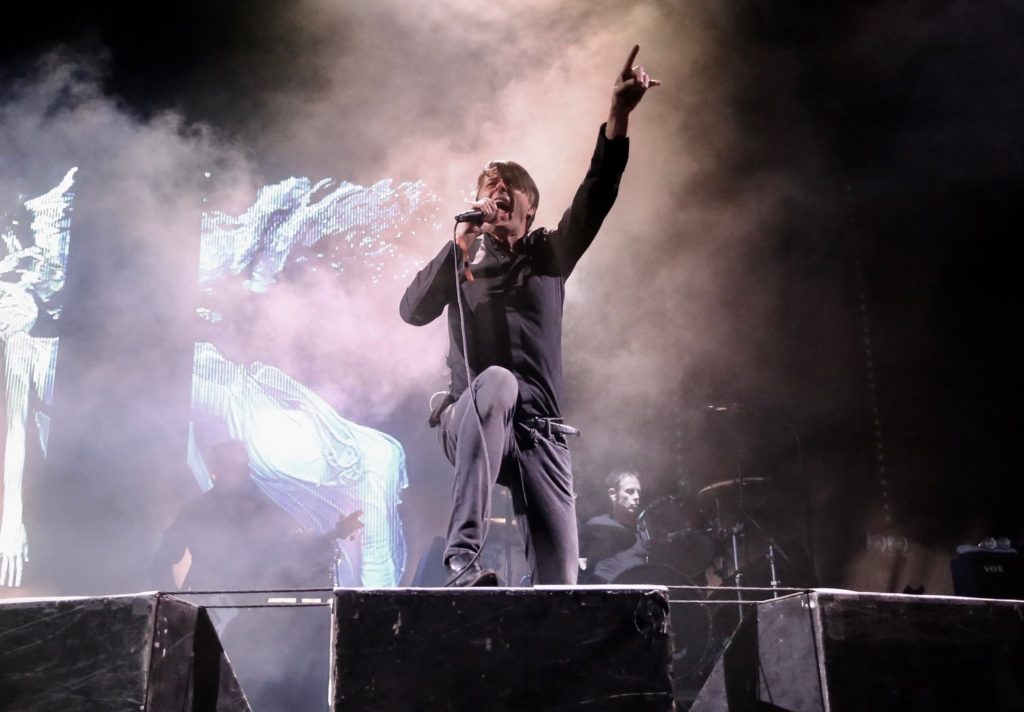 There’s a lot more going on around the site. Convoy Cabaret remains a bit of an enigma – most of the time I pop in to find it’s between acts, and next time it’s fit to bursting. However I do manage to catch Mr Marcaille, who someone recommends, ‘plays a cello in his underpants’. I presume the cello is not actually in his underpants. Mr Marcaille has quite a presence, and growls his way through a punk/heavy metal set. 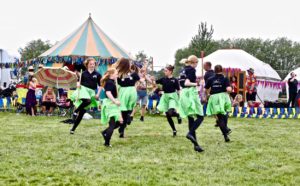 The Children’s Village, centred around a green, is always very busy. There’s a messy play centre, lots of Lego and craft areas, a healthy food van with some vegan options. A dance troupe called Folk Friendzy entertain everyone. The famous Bearded Theory school is still in operation on Friday too, offering a proper school day (but more fun, obviously) to those quick enough to sign up.

Saturday evening we go down to the Woodland Stage. This is Bearded’s ‘second stage’ and is my personal favourite – it’s carved from oak, and set in an atmospheric shady glade where lights twinkle in the trees. A perfect setting for an appearance by folk supremo Seth Lakeman. I first saw him at this festival in 2013, where crowds (mainly female, can’t think why) queued at his album signing. He’s now back again (although he did accompany Robert Plant last year). Seth plays a drama-infused foot-stomping folk set, switching from guitar to fiddle, and plays some material from his new solo album. 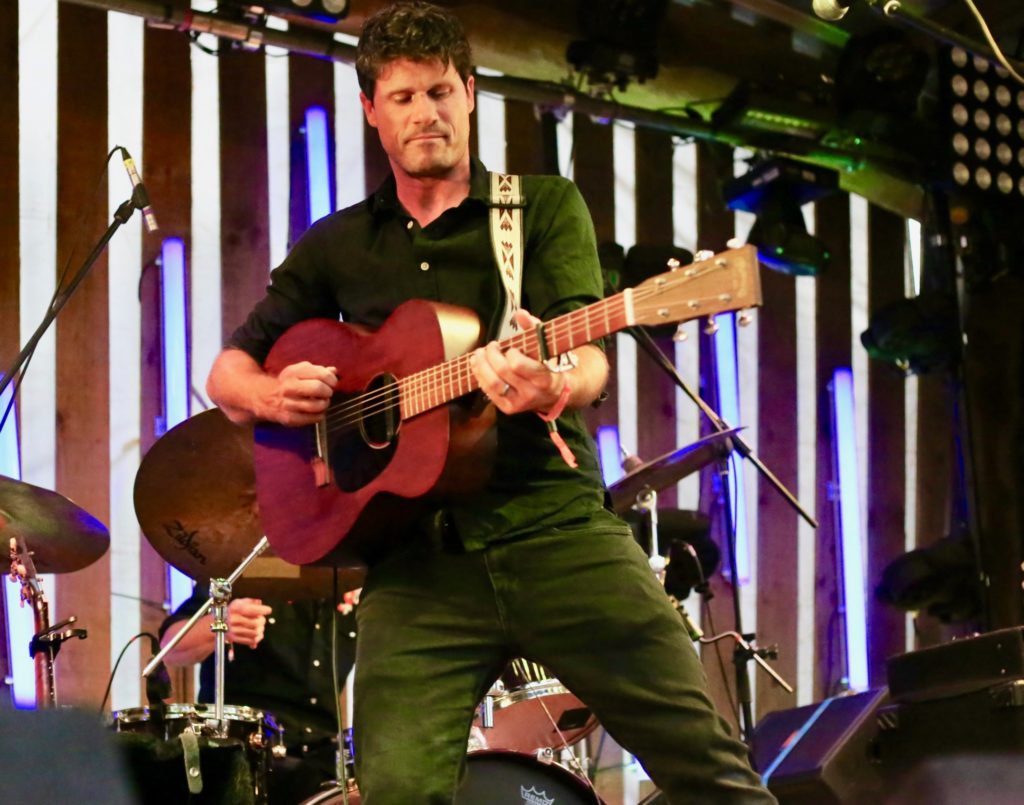 Later we wrestle with a head-on clash: The Cult or Slow Readers Club. Decisions, decisions… but “Readers, Readers” wins out. The young Manchester band who have a madly loyal fan base have recently given up their day jobs, completed a European tour and released their third album Build a Tower. Performing live, Slow Readers Club are compelling. Their timing is impeccable and Aaron Starkie’s vocals define the band’s sound with an intensity and, something unexpected, a hugely emotional delivery. Readers, readers indeed.

The pathway leading to the Woodland Stage has over the years transformed into an entire avenue of artisan food, workshops and quirky indie businesses which suit the more chilled atmosphere of the stage itself. Such as the steampunky Cowley’s Fine Foods with their Unicorn Jerky, and Bacon relish. The Alpaca Soundsystem tent has a little disco going all day with some superb afternoon chillout sounds, and Signature Brew provides an appealing alternative to the main bar lagers. The music-inspired brewery has a bespoke Slow Readers Club lager, and it has been handed out free to anyone wearing the band’s T-shirt. Good lads.

The Lancashire Hotpots set the scene for Beaded Theory’s famous Sunday shenanigans and it’s a pleasure to revisit the fiendish rhymesters. I fear Ikea adequately describes those hellish purveyors of Billy bookcases. 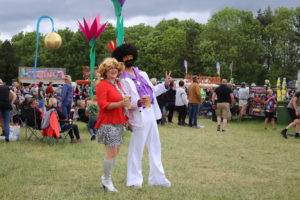 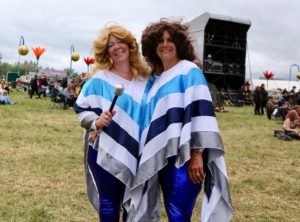 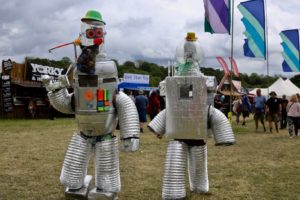 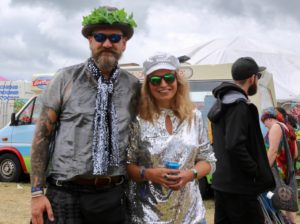 The annual beard and fancy dress competition is always a focal point. This year’s theme is ‘Disco’ and there are some beauties out there in the crowd. BT’s MC picks out the best ten who are summoned on to the stage for the final judging. Despite a touch of clever lateral thinking, the lady in a packet of Discos doesn’t win but the spacemen winners (pictured above) deserve their free tickets to next year’s festival. 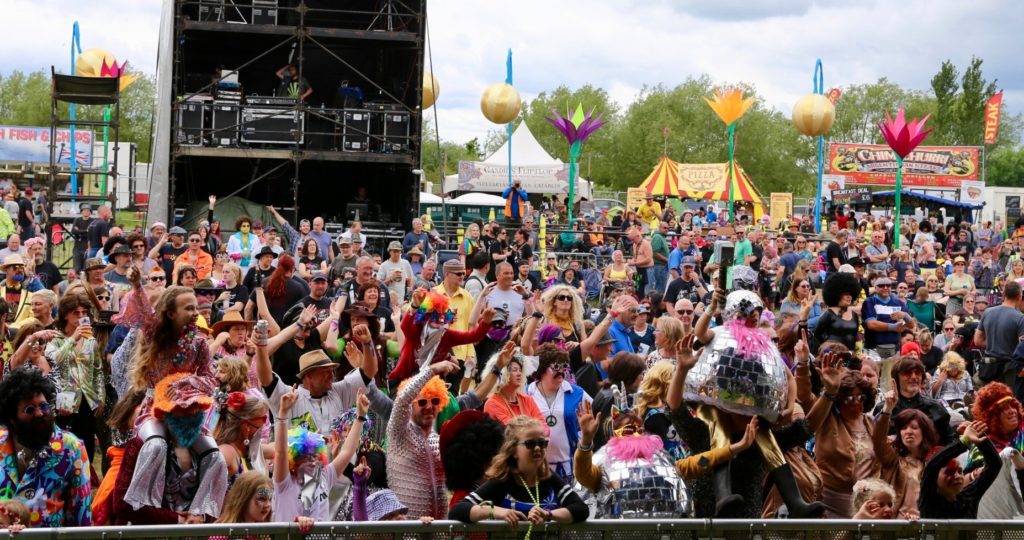 The Maui Waui tent has a diverse range of music on its stage, and Nebula Sun caught my eye and ears with their global sound, part jazz, part Afrobeat and something a bit prog as well. I particularly loved the sax – it was a very thoughtful and inspiring set.

Since Doves reformed this year, fans have been snapping up tickets to their rare gigs so it’s quite a feat for BT to have snapped them up. They are the penultimate act and it’s as if they never went away. “This is our first festival for ten years”, Jimi Goodwin announces. I saw them at Hop Farm 2009 which may have been their last festival. They run through a set of their back catalogue including Cedar Room and Winter Hill, and I can see plenty of happy looking men of a certain age singing along, word perfect. 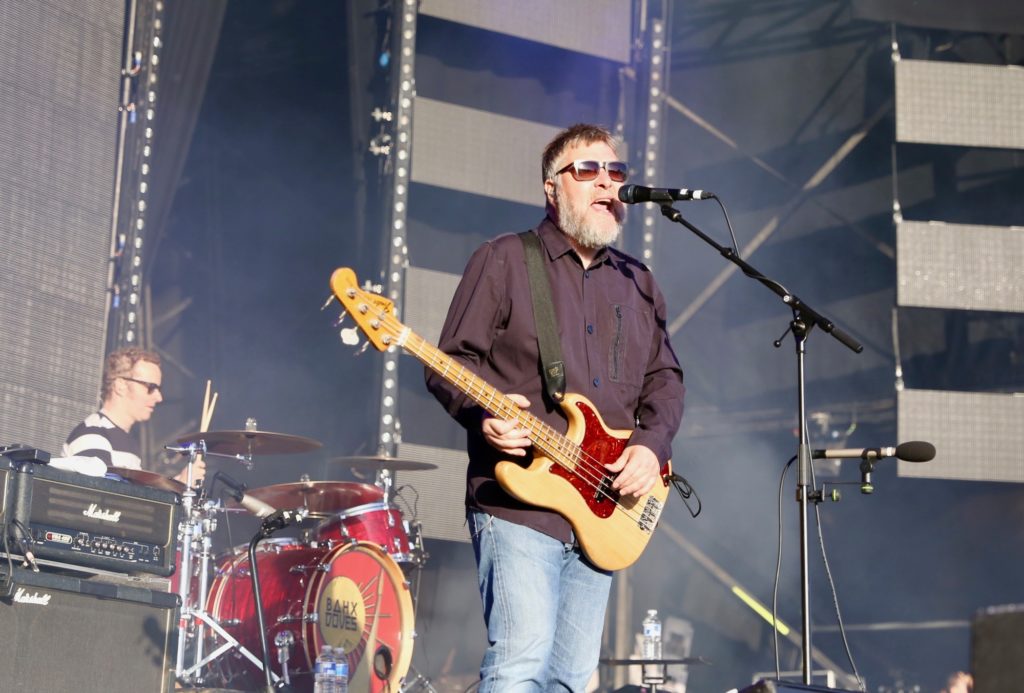 In contrast to Jimi Goodwin’s minimal approach to stage antics (stand there, play guitar, sing), the final act provides a plethora of visual appeal. Little Steven & The Disciples of Soul bring showmanship and a huge spectacle to the Bearded Theory main stage (helped by a pesky rumour of Bruce Springsteen making a surprise appearance) and provides slick, all-round family entertainment.

We decide to end the festival at Magical Sounds. Despite its move to a quieter part of the site, the tent has been more popular than usual and we find there’s no room to move, let alone dance. Whereas Magical Sounds has tended to attract primarily older people, this year there’s a big influx of younger people and the tent can hardly cope. So, sadly we leave The Orb to it, and head over to the Woodland for a final pint and a dance to the Skatalites.

Well done to everyone connected with Bearded Theory, it was yet again a brilliant event. There were bands we missed (Henge, The Cult, The Blinders, for starters ) but the acts we saw more than made up for it. But then it’s not just about bands, it’s about atmosphere, and Bearded Theory manages it every time.

FOR MORE IMAGES CLICK OVER TO BEARDED THEORY: THE STORY IN PICTURES